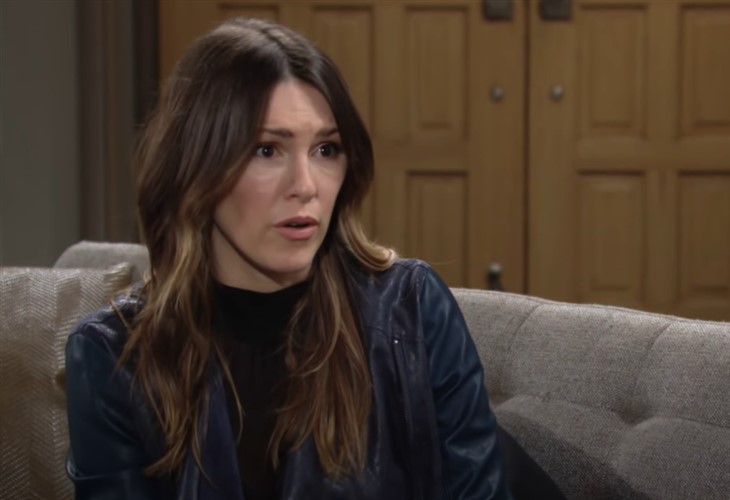 The Young and the Restless (Y&R) spoilers reveal Chloe’s guilt getting the best of her after she became Chelsea’s unwitting attempted murder accomplice, nearly killing Rey.

Chloe (Elizabeth Hendrickson) has to tell someone what happens — someone who won’t send her straight into a jail cell and take away her children. So, she confides in her husband, Kevin (Greg Rikaart), which makes sense. It’s not like he doesn’t regularly break the law. While sitting at Crimson Lights, Chloe spills her guts because she knows Kevin will take care of her.

Kevin is shocked by what he hears, but he certainly has no intention of getting the police involved. Perhaps he can get his brother, District Attorney Michael (Christian J. LeBlanc), to help them out. After all, Chloe didn’t realize her little pranks could have hurt or killed someone.

Chloe acts more nervous than ever when Rey (Jordi Vilasuso) walks into Crimson Lights, sees her, and sits right down. He knows in his gut that Chloe was somehow involved in what happened and that Chelsea (Melissa Claire Egan) is totally faking the mental breakdown she thinks will get her out of serving prison time.

Chloe tries to play it cool while Rey just keeps talking, but her face is bound to give it all away. She can’t risk jail. After years of her own mental instability after Delia was killed, and then faking her death and being on the run, she finally got her life together. She has Kevin as a loving husband and two beautiful children, Bella and Miles. This is what she’s always wanted and she can’t lose it.

However, she has to decide if telling Rey the truth will help or hurt her. If she gives away Chelsea’s con, she risks losing her best friend. But if she spills all to Rey, she has a chance of getting away with everything scott-free. Rey already knows exactly what happened because he is using his cop instincts. He just needs the one person who knows everything to say it on the record. Stay tuned to The Young and the Restless weekdays to see how this story plays out.