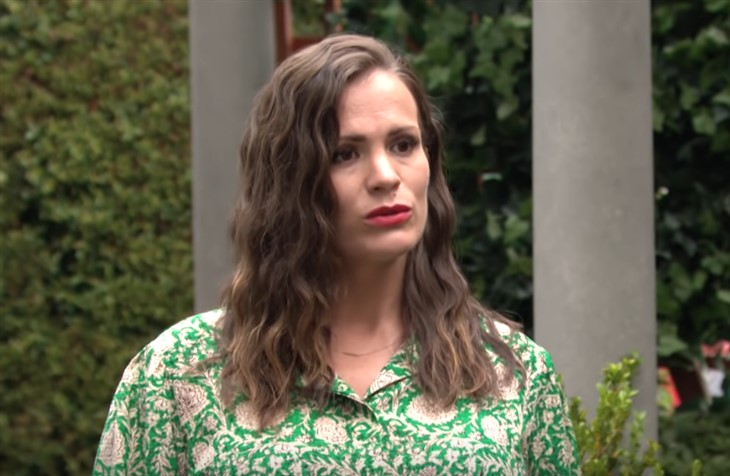 The Young and the Restless (Y&R) spoilers for Tuesday, July 13, 2021, reveal in Genoa City, Wisconsin Chelsea’s dreams coming true because she did what she does best.

There’s no telling if Chelsea’s (Melissa Claire Egan) mom really did fall and break her hip, but that’s the story Chelsea is using and she’s sticking with it. Lo and behold, it works and she manages to get released from the mental institution to go take care of her mom.

Considering that she wasn’t crazy and knew exactly what she was doing when she tried to kill Rey (Jordi Vilasuso), this is quite the con and coup she pulled off. Will she get everything she wants and by everything we mean Connor (Judah Mackey). Chelsea begs Adam to let her take her son to stay with his grandmother but Adam (Mark Grossman) holds all the cards and is not sure he wants to take any chances with this woman he knows so well.

Rey can finally stop investigating the woman who tried to kill him because that wasn’t a weird conflict of interest or anything. On Tuesday, he gets a new case. Does the GCPD put him on the case of the mysteriously missing Mariah (Camryn Grimes)? Nobody can seem to find her, which is highly unusual and also may give Abby (Melissa Ordway) a nervous breakdown. Where can Mariah be? Perhaps Stitch really did return for a reason other than to smile at Abby and hand her a baby gift.

Nate (Sean Dominic) and Elena (Brytni Sarpy) really do want to give it another go this time but there seems to be a third wheel and this time it’s not Devon (Bryton James) since that ship seems to have long sailed. Now, Imani (Leigh-Ann Rose) is getting in the way of their romance and she seems to enjoy doing so. Will Elena fight back and does Nate enjoy all this attention? After all, he’s been hurt enough by enough women that being the center of attention just once might suit the good doctor. Stay tuned to The Young and the Restless weekdays to see how these stories play out.