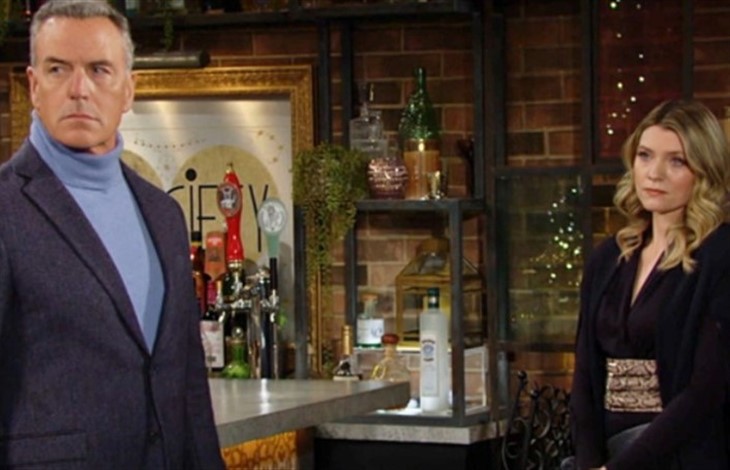 The Young and the Restless spoilers reveal that Tara Locke (Elizabeth Leiner) came to Kyle Abbott (Michael Mealor) with a sob story. Claiming Ashland Locke (Richard Burgi) “tricked” her into confessing the affair, she will beg Kyle to claim his biological child. Kyle will decide to publicly confess. However, could this be just another attack on the Abbott family?

The Young And The Restless Spoilers – Tara Locke Isn’t Gullible

Y&R spoilers reveal that right before Leiner made her debut as Tara, the actress gave a rundown of her character. She said that Tara loves power, money, and the status of being Ashland’s wife. She is also quick and intelligent, so we find it hard to believe that Tara would be gullible enough to fall for Ashland’s “trick.” We do, however, believe Ashland could threaten her to help him with a scheme to punish Kyle and the rest of the Abbott family.

When someone crosses Ashland, there will be consequences. One way for Ashland to do that is to humiliate Kyle. It was embarrassing enough having everyone ask why Ashland’s wife interrupted Kyle and Summer Newman’s (Hunter King) engagement party for an “urgent personal matter.” It will get even more humiliating when Kyle makes a public confession, which we will get to in a bit.

The Young And The Restless Spoilers – Destroying Summer Newman’s Relationship

The Young and the Restless spoilers reveal that Mealor told Soap Opera Digest last month that Ashland wouldn’t just target Kyle. The actor said that Ashland would target the people that Kyle loved and cared for. This includes the woman that he is about to marry. Tara made no sense running to Kyle and crashing his engagement party. She could have texted, called, emailed, or even met him after the party. Instead, she burst right in and she had to know that everyone would start talking.

Plus, she begged Kyle to give her and Harrison Locke (Keller Enriquez) a place to hide. This raises alarm bells, especially since Ashland also happens to be in Genoa City at the same time. We also know that later in the week, Tara will claim that Ashland is threatening to take custody of Harrison.

Kyle only assumes that Harrison is his child. No paternity test has been done and it’s possible that the child could belong to either man. Plus, why is a public confession necessary? Courts are pretty discreet when it comes to minors. Tara would just need to tell the judge that Ashland isn’t the father and a paternity test would be ordered. Nobody would need to know the results except Ashland, Tara, the judge, and the required courtroom employees. In fact, Tara could claim that she doesn’t know who the father is.

Now, let’s say that Tara is right about Ashland having the power to take custody of Tara. Again, Kyle could be confirmed to be the father and it could just stay in the courts. So, why is a public confession necessary? Even if Ashland told the media about Tara’s affair, she could always deny it or move to another state. It sounds like Ashland and Tara might be pulling the wool over Kyle’s eyes. This sounds like it could be another attack on the Abbott family.

The Young And The Restless Spoilers – What About Victoria Newman?

As for Ashland partnering with Victoria Newman (Amelia Heinle), perhaps that is a separate revenge tactic due to Victor Newman’s (Eric Braeden) actions the day of his heart attack. What do you think?