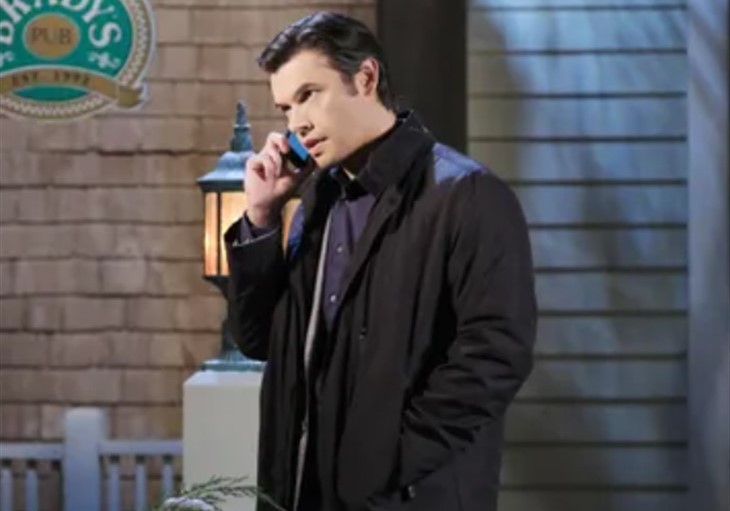 Days of Our Lives spoilers tease that Xander Kiriakis (Paul Tefler) was duped by Kristen DiMera (Stacey Haiduk). Kristen, while wearing a Sarah Horton (Linsey Godfrey) mask, convinced Xander that she didn’t love him, and in fact was actually still in love with Rex Brady (Kyle Lowder).

As part of her scheme, Kristen made love to Rex while impersonating Sarah on Days of Our Lives. But after she broke up with Xander, she also told Rex that she had just been using him. So Rex left town and everyone believes that Sarah went with him. While truthfully, Kristen was taken Sarah to an abandoned island.

But Kristen has tried the same scheme with Kate Roberts (Lauren Koslow) but Kate escaped. Kristen told Kate exactly what she planned to do. Using a Kate mask, Kristen broke up with Jake Dimera (Brandon Barash) and Kristen was about to send Kate to the island.

Once Kate recovers from her ordeal, it seems likely she will realize the same thing may have happened to Sarah! All Kate needs to do is call her son Rex to confirm that Sarah never left town with him. And she might be the only one. Once Xander hears about Kristin’s impersonation of Kate, he will suspect the same thing. Xander may ask Kate to call Rex, but she would likely confirm that Kristin most likely took Sarah away.

DOOL Spoilers – Xander Kiriakis Will Want To Save Sarah Horton Before Maggie Horton Realizes She Is In danger!

Xander will of course hope to reunite with Sarah but his primary concern will be to bring Sarah home before Maggie Horton (Suzanne Rogers) realizes her daughter is in trouble. It won’t be long before Maggie begins to suspect something is wrong with Sarah. While she knows that Sarah supposedly went away with Rex, it will concern her when she can’t reach her daughter. At some point, she will call Rex.

Days of Our Lives spoilers show Maggie is an alcoholic and Xander will be concerned that she will start drinking again if she believes Sarah is in trouble. To that end, he may ask Rex to convince Maggie that Sarah is with him but wants to put some distance between herself and everyone in Salem, including her own mother! That should buy Xander some time, but not that much. Xander knows a lot about the criminal underworld and might have an idea where Kristen would have sent Sarah. Look for a race against the clock as Xander prepares to rescue his fiancé!

DOOL Spoilers – What Will happen?

Will Kate and Xander realize that Kristen may have taken Sarah? How long until Maggie realizes the truth? Can Xander rescue Sarah in time? It’s a race against time so stay tuned to Days of Our Lives airing on weekdays on NBC. And don’t forget to check back right here regularly for all your Days of Our Lives news, information, and spoilers!