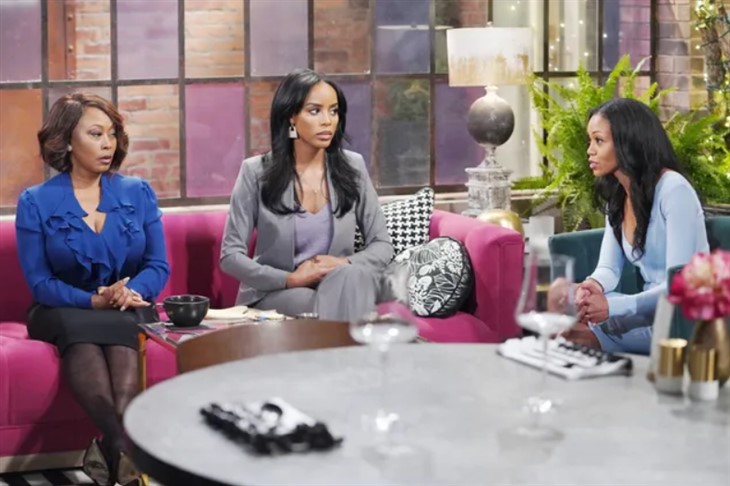 The Young and the Restless (Y&R) spoilers for Wednesday, June 30, 2021, reveal Amanda seriously regretting ever trying to get to know her real family.

The Young And The Restless Spoilers – Is Amanda Sinclair At The End Of Her Rope?

Every day that Amanda (Mishael Morgan) investigates her birth mother’s family, she learns of more lies and secrets — and about a father who wanted her and her twin sister very much. She can’t believe how much Naya (Ptosh Storey) has been a slave to her own father, obeying every order he gave, even at the cost of her first-born children.

She spent years trying to make sure nothing disrupted their perfect life, or at the very least their perfect reputation. On Wednesday, Amanda has had enough and lets loose on Sutton, wondering if he is guilty after all and if she should drop his case. She can’t take the shocks and the heartaches anymore and is at the end of her rope.

Devon (Bryton James) always has a lot of problems in his life so it’s hard to say which one is bothering him so much now that he goes to Victor Newman (Eric Braeden) for help. Could this have anything to do with Amanda and the problems with her crazy family? Victor seems to know something about Amanda’s father and maybe he will be the key to her getting to the bottom of what really happened to the man who truly wanted her.

The Young And The Restless Spoilers – Billy Abbott Goes Digging

Summer (Hunter King) had a request of her old pal, Billy (Jason Thompson), before she left for Italy and he is going to honor it. Besides, getting more information on Ashland (Richard Burgi) and Tara (Elizabeth Leiner) is good for Billy’s job. So, off to his old home he goes to talk to Tara.

Unfortunately, Tara has Jack (Peter Bergman) snowed and he just wants to protect her delicate sensibilities so he heads Billy off at the pass and does his best to convince his brother to leave poor Tara alone. It looks like Jack will be unsuccessful in his quest and Billy will finally get to ask a whole lot of questions of Tara Locke. Stay tuned to The Young and the Restless weekdays to see how these stories play out.