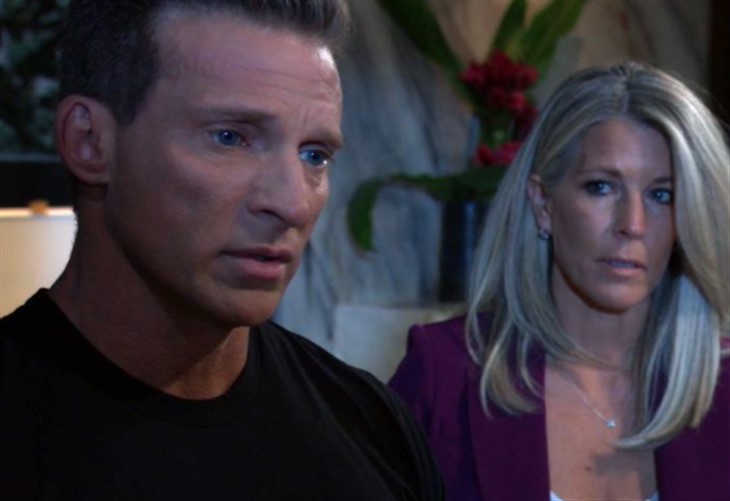 General Hospital (GH) spoilers for Wednesday, June 30, 2021, reveal Jason Morgan having a big decision to make now that Carly has proposed her idea — so to speak.

General Hospital Spoilers – A Marriage Made In Mob Hell?

Carly (Laura Wright) caused a problem for Jason (Steve Burton) controlling ‘the business’ when she dressed all in white and went to the Meeting of the Five Families. Now, Carly is in control when it’s Jason who knows what the job actually entails.

So, Carly thinks if she and Jason get married, it will solve everything. They may not be in love but at least they love one another and have for years. Of course, Sonny (Maurice Benard) is still alive and Jason is falling in love with Britt Westbourne (Kelly Thiebaud), so this can cramp everyone’s style eventually.

Britt has no idea what Jason is about to do and thinks things are going to work out between her and Jason. When she runs into Spinelli (Bradford Anderson) she tells him Jason wouldn’t keep secrets from her because they are passed that point.

Meanwhile, Carly meets with Diane (Carolyn Hennesy) to work out all the legalities of this odd arrangement and makes sure she keeps this all to herself — for now, at least.

Finn (Michael Easton) realizes Elizabeth (Rebecca Herbst) is right and Violet (Jophielle Love) needs him so it would be foolish to turn himself in for allegedly killing Peter (Wes Ramsey) and hiding his body in a freezer. But now Scott (Kin Shriner) is there wondering what legal advice he may need. Will Finn tell him or make up some other story? We do know that Scott gives him advice to do what’s best for his family.

At the Metro Court, Sam (Kelly Monaco) and Austin (Roger Howarth) run into one another and she begins questioning him more about Maxie’s (Kirsten Storms) baby. Austin knows he told the truth about what happened, or at least the parts he saw and wonders if Sam is ever not suspicious.

Meanwhile, in their little house in the woods, Anna (Finola Hughes) makes quite the discovery. Does this have to do with Peter or the baby? Stay tuned to General Hospital weekdays to see how these stories play out.