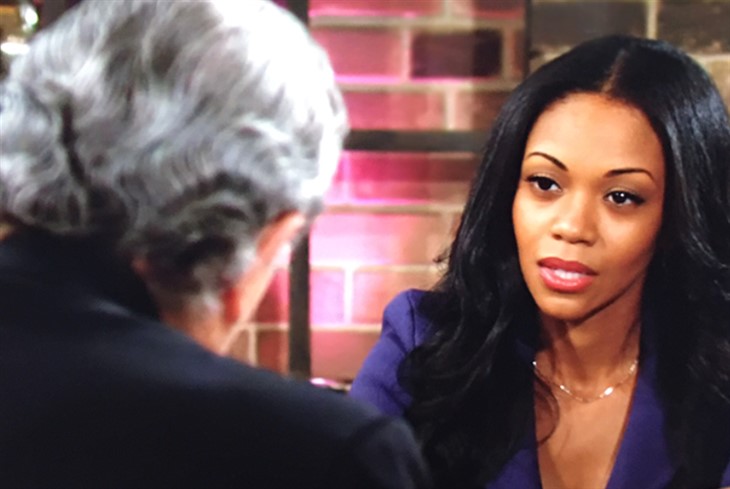 The Young and the Restless (Y&R) spoilers for Friday, July 16, 2021, reveal in Genoa City, Wisconsin Amanda fed up with her family, wanting to know the truth about her father once and for all.

The Young And The Restless Spoilers – Amanda Sinclair Has Had Enough

Amanda (Mishael Morgan) was hesitant when Naya (Ptosha Storey) asked her to represent Sutton and defend her grandfather. She was afraid of what she would learn and what she now knows is that her mother and grandfather have lied to her consistently and her father really did want her and twin sister Hillary.

She also learned that Victor (Eric Braeden) knew a lot about her father and that’s who she turns to on Friday. Amanda wants all the information she can get to close this case and put this chapter of her life to rest for her own peace of mind. Will The Great Victor Newman be able to pull out all the stops and give her what she needs?

Y&R Spoilers – Nikki Newman Is There For Victoria Newman

Nikki (Melody Thomas Scott) pretty much knew what Victoria (Amelia Heinle) was planning with Ashland (Richard Burgi) — business-wise at least — but she didn’t tell Victor a thing. However, Nikki did not know that Ashland was sick and dying. On Friday, she is there as emotional support for her daughter.

She realizes that Victoria has fallen for this man but falling for a man with cancer can’t be easy, especially when she is told that cancer is terminal. Does Victoria realize what she’s getting into becoming involved with this man and asking him to move in?

Billy (Jason Thompson) and Phyllis (Michelle Stafford) are both determined to learn as much as they can about Ashland and Tara Locke (Elizabeth Leiner) so they decide why not find out everything together? After all, two minds are better than one, right? Especially when both minds can be pretty devious. Phyllis wants to get the dirt on Tara and get Summer back to town and Billy wants to get the dirt on both of them for both professional and personal reasons. Can somebody say Victoria? Stay tuned to The Young and the Restless weekdays to see how these stories play out.

General Hospital (GH) Spoilers: Sam Sleeps With Dante To Prove That She Is Over Jason!

90 Day Fiancé: Melyza Struggles With Trust Issues Ahead Of 2-year Separation From Tim