General Hospital (GH) Spoilers: Sam Sleeps With Dante To Prove That She Is Over Jason! 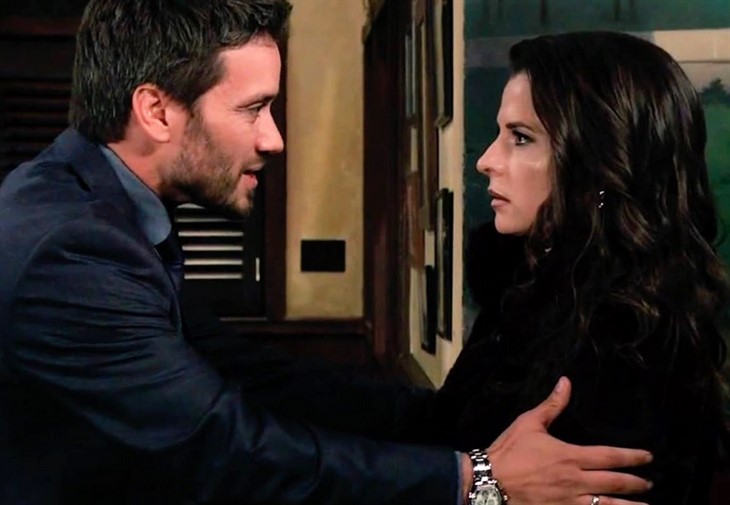 General Hospital (GH) spoilers indicate that in Port Charles, NY Sam McCall (Kelly Monaco) is embarrassed about the kiss she shared with Dante Falconeri (Dominic Zomprogna) on the 4th of July. Sam had literally just heard about Jason Morgan’s (Steve Burton) engagement to Carly Corinthos (Laura Wright). Since their breakup is still vwry recemt, she was taken by surprise by the news so she got drunk and with the help of Liz Webber (Rebecca Herbst), she set fire to many of her keepsakes from her time with the mob enforcer to declare her own independence from the man she’s been with for many years. She even burned her leather jacket!

General Hospital Spoilers – Sam McCall Was In A Very Vulnerable State And Kissed Dante Falconeri Just As A fireworks We’re Going Of!

Dante had just told Sam that if he had been Jason he would have chosen Sam, That really got to her and In what she’s now calling a moment of weakness, Sam kissed back when Dante kissed her. She realized what she had done almost immediately and ran away. Then the next time they saw each other, Sam tried to explain, and Dante agreed, that the kiss meant nothing. But it’s obvious that’s not exactly the truth.

Dante and Sam certainly don’t seem like they’re meant to be soulmates and together forever. Dante’s soulmate is Lulu Falconeri (Emme Rylan) and it’s a pretty safe bet that when and if Lulu wakes up from the brain injury that she suffered during the explosion at the Floating Rib last fall, that Dante will be back in her arms before Sam could even blink. But that doesn’t mean they can’t provide a lot of comfort to each other right now. Rebound or not, it seems more and more likely that Sam and Dante will be sleeping together very soon. Sam will certainly need comforting as the wedding draws closer.

Do you think Sam and Dante will be sleeping together in the near future? WIll they realize that their romance is likely just a rebound situation? Will they begin sleeping together just as Lulu recovers? People like to love the one they’re with in Port Charles, so stay tuned to General Hospital airing weekdays on ABC. And don’t forget to check back right here regularly for all your General Hospital news, information and spoilers!