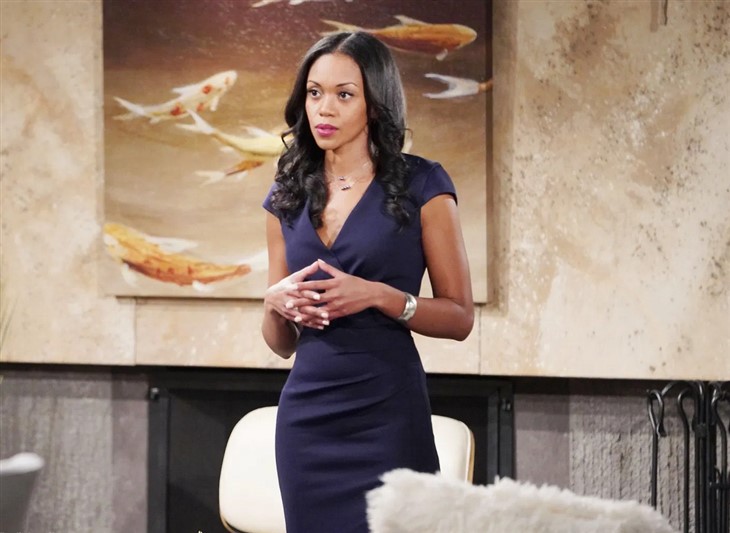 The Young and the Restless (Y&R) spoilers document that in Genoa City, Wisconsin, Amanda Sinclair (Mishael Morgan) has every right to be mad. Her newly found mother and grandfather have withheld information about her father’s death from her.

Y&R fans are in the same soapy boat as Amanda, in that they also don’t know the whole story. Did Naya Benedict (Ptosha Storey) kill Richard Nealon (no actor’s name known for this role) as she’s now confessed to doing and is Amanda wrong in believing that Sutton Ames (Jack Landron) is allowing her to take the rap for his actions?

As the audience recalls, Amanda came to Genoa City, Wisconsin, as part of Colin Atkinson’s (Tristan Rogers) mind game. He wanted to throw Devon Hamilton (Bryton James) off-track and did so.

Devon’s belief that Amanda was involved in stealing Katherine Chancellor’s (Jeanne Cooper) inheritance from him was natural to believe at the time. Morgan’s second character was Hilary Hamilton’s (Morgan) doppelganger or, as Devon instinctively believed, she was his late wife’s identical twin.

So, Amanda had no idea that a bated draw to GC would eventually result in her coming to learn that she had a twin sister, another sister, Imani Benedict (Leigh-Ann Rose), a mother, a grandfather, and other family members.

Naya may have killed Richard. But it could have been accidental, with Sutton covering up what happened in order to protect his family and his political career.

It was very telling when Sutton sternly refused to allow Amanda to pursue Richard’s knowledge of her existence just prior to his death. That told Amanda that she was being lied to.

While Amanda was right, more than one point can be true and the explanations for Naya’s and Sutton’s actions also explainable. Hopefully Naya didn’t commit an intentional act because if she did, then a long jail sentence likely awaits.

The Young And The Restless Spoilers – Sutton Ames Nearing Reveal

Sutton successfully kept whatever happened from coming out for approximately 30 years. But the murder charge that he was implicated in opened the daytime door to the mystery that Amanda is entangled in.

Amanda won’t allow the end of her father’s life to remain shrouded in questions. Y&R seems ready to resolve the storyline this summer and with it Naya could be cleared or at least excused and Sutton might emerge as a man who was simply protecting his daughter.