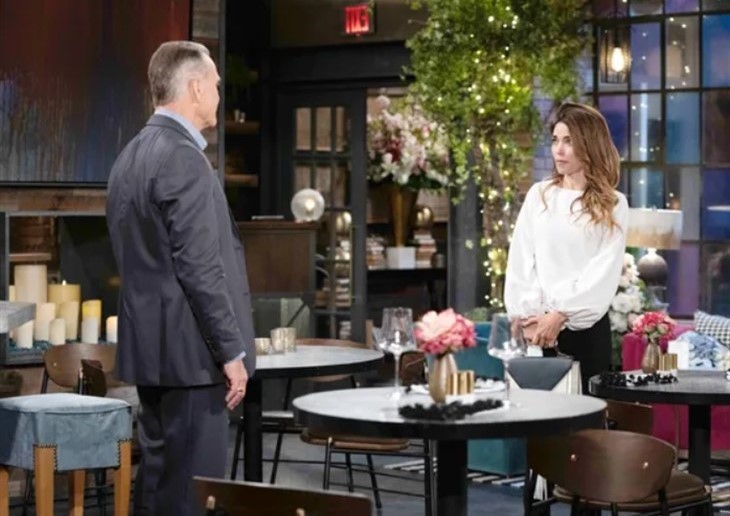 The Young and the Restless (Y&R) spoilers for the week next two weeks, July 19 to July 30, are out of this world juicy. Let’s not waste a single minute unpacking all of the fun and games, scandal and betrayals going down in Genoa City, Wisconsin.

First off, Ashland Locke (Richard Burgi) is betrayed by his baby momma Tara Locke (Elizabeth Leiner). She agreed that she would play nice because he’s dying, but she changed her mind and now wants sole custody of Harrison Locke (Kellen Enriquez).

As a runner-up prize Ashland gets to move in with Victoria Newman (Amelia Heinle) who we still haven’t figured out what her end game is—is she a super big con or is she falling for the terminal man?

Either way, guess what, daddy dearest Victor Newman (Eric Braeden) blows like a volcano at this latest development. Later Victoria discovers something stunning about her new roomie and it leaves her breathless.

Where is Mariah Copeland (Camryn Grimes)? Her SO Tessa Porter (Cait Fairbanks) and Abby Newman-Abbott-Chancellor (Melissa Ordway) desperately want to know and get into a snit fit with each other.

Until helpful but creepy Ben “Stitch” Rayburn (Sean Carrigan) runs interference and cools Abby down. Run Abby, run! These two get all fuzzy and warm walking down memory lane but we can’t help but shout at the tv, ‘what did you do to Mariah, Stitch!?’

Victor is everywhere during the next two weeks and at one point he tries to help Amanda Sinclair (Mishael Morgan) get the goods on sneaky Sutton Ames (Jack Landron). Totally out of the blue, Naya Benedict (Ptosha Storey) disappears and Amanda is left seething about her missing mom and her wasted bail money.

Michael Baldwin (Christian LeBlanc) gets involved, but not in the way you think!

Summer Newman (Hunter King) has no time to do her new fancy pants job because half of Genoa City keeps flying to Italy to bug her. Speaking of Summer, Phyllis Summers (Michelle Stafford) gets the goods on Sally Spectra (Courtney Hope).

Adam tells Sharon Rosales (Sharon Case) that he misses her and in the heat of the moment things could get steamy. To top it all off, Billy Boy Abbott (Jason Thompson) butts in and tells Sharon that Adam is nothing but a no-good, low down double dealer who doesn’t deserve her time of day.

Meanwhile Amanda and millionaire Devon Hamilton (Bryton James) take things to the next level which could mean he is about to forge a life with his ex-wife’s twin. Which would not be at all awkward?