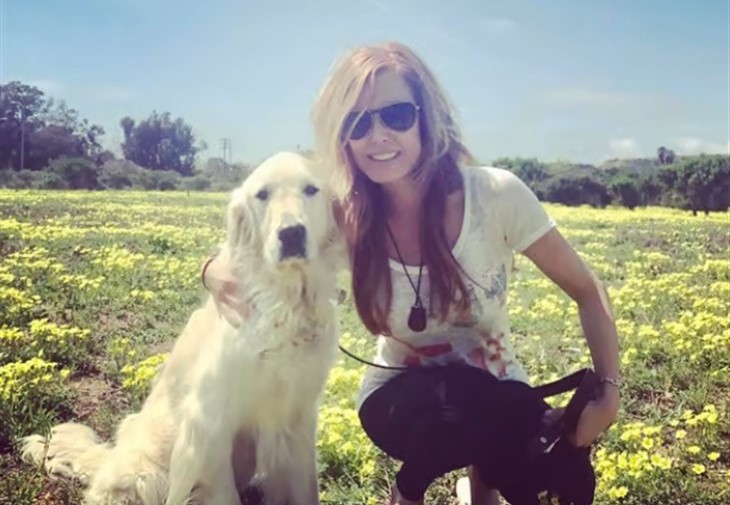 Fans of The Young and The Restless actress who have been following her on her social media will remember that her beautiful golden retriever, Buddha has been having health problems. Tracey first shared Buddha’s battles with liver disease back in 2017. Tracey chose, rather than relying on traditional medicine which probably didn’t show a lot of promise for treatment let alone a cure, to turn to homeopathic veterinary medicine for answers.

At that time, when Buddha first became ill, Tracey E. Bregman had shared a photo with the big furry guy and herself in a doggie-doggie mama embrace. Then she explained the photo, indicating that the photo had been taken after Buddha had been undergoing tests which took two days, including a biopsy. The photo was of their reunion after Buddha had been in the animal hospital for two days, obviously glad to see one another again. Tracey also said not only she, but Buddha had cried when they saw one another again as he put his head on her chest for what seemed like the longest time.

She requested prayers for her beloved Buddha, also. Thanks to the homeopathic veterinary treatments, Buddha lived over five years after he was first diagnosed. Viewers of The Young and The Restless with pets can certainly empathize with Tracey’s loss and the long struggle for healing that never came, although the two did have those over five years more with one another.

Y&R Spoilers – A Little More About Tracey E. Bregman Herself

Longtime fans of Tracey E. Bregman will remember that she started her daytime drama career on NBC’s Days of Our Lives playing Donna Craig. That was from 1978-1980. Donna Temple Craig was the daughter of Don Craig (Jed Allan) and his first wife Lorraine Craig (uncast character). Don Craig was Marlena Evans’ (Deidre Hall) first husband. After that daytime role came to an end, Tracey was approached by Wesley Kenney, a former producer of Days of Our Lives who later joined The Young and The Restless as an executive producer.

He offered her the role of Lauren Fenmore, who quickly became a fan favorite as the feisty redhead sparred with rival Traci Abbott (Beth Maitland). They were romantic rivals and vied for the affections of Danny Romalotti (Michael Damian) and Brad Carlton (Don Diamont) for years. Beth and Lauren are best friends offscreen, however, and they even won Daytime Emmys in 1985 on the same day! Beth won in the Outstanding Supporting Actress in a Drama Series category, while Tracey won in the Outstanding Ingenue in a Drama Series.

The Young And The Restless (Y&R) Spoilers: Jess Walton Asking For Prayers https://t.co/8Hp8ocxDPe

That category was added the year that Tracey won, so she was the first winner ever in that category. Longtime viewers of The Young and The Restless will remember when the two women finally made peace with each other in an emotional scene that fans will remember forever. Condolences are extended to Tracey on the loss of her longtime furry best friend Buddha.