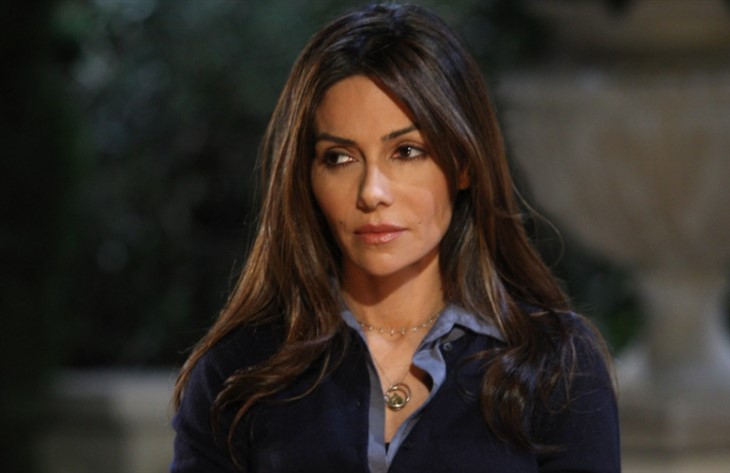 General Hospital (GH) spoilers tease that Réal Andrews posted a cryptic photo on his Instagram account recently that appeared to have emanated from Prospect Studios. Réal, his wife, Maurice Benard, Vanessa Marcil, and a friend were in the photo. They weren’t directly in front of the studio, but that is the location that Réal’s phone apparently pinged to when the photo was taken. Could Brenda Barrett be on her way back to Port Charles and General Hospital?

General Hospital Spoilers – The Date On The Photo Was June 6, 2021

It is plain that Vanessa, who has not appeared at General Hospital since April 23, 2013, is still in close touch with her former co-stars. She may be on her way back to General Hospital since when one looks at her Instagram account, she is shown with her friend, whom she refers to as “MC” in “secret locations” and both are dressed the same way as they are in Réal’s photo.

Another photo on Vanessa’s Instagram shows her dancing with Maurice, so wherever the friends were “hanging out” as Réal put it, they were having a lot of fun! Perhaps we can deduce from Maurice’s hair being back to black and Vanessa hanging out with her friend, and Réal and his wife, that both Sonny and Brenda may be back in a few weeks. General Hospital is currently filmed through the end of July, so perhaps it may be towards the end of the summer or possibly early fall before viewers find out about this mysterious meeting!

General Hospital viewers know that Sonny is still in Nixon Falls in the next couple of weeks’ shows with Nina Reeves (Cynthia Watros) returning home to Port Charles for a visit. Could Brenda pass through Nixon Falls and find Sonny and trigger his memories to come back? Perhaps – it wouldn’t be the first time that Brenda brought Sonny home from somewhere. In 2010, Brenda was in Italy with her modeling job and as she stepped on a stage for a press conference, someone tried to kill her – her bodyguards stopped the assailant, but as she turned to the audience afterward in tears, she spotted Sonny in the audience! Sonny had been running from the police, and ultimately she convinced him to return to Port Charles – with a little help from Jason Morgan (Steve Burton)! This was during the Balkan storyline.

Longtime General Hospital viewers will recall that Sonny and Brenda go way back, and it was the start of the romantic rivalry between Jasper “Jax” Jacks (Ingo Rademacher) and Sonny, who was in a torrid triangle with Brenda! Since a triangle between Jax, Sonny, and Nina may be on the horizon, it would only be fitting that of all people, Brenda could be passing through the small town of Nixon Falls and bring Sonny back since Nina won’t! Back to that mysterious meeting and photo with Réal Andrews and his wife along with Vanessa and her friend and Maurice, Maurice’s Instagram stories provide more detail – they are all at a wedding! However, this seems to be a real-life one and not a remarriage of Sonny and Brenda!