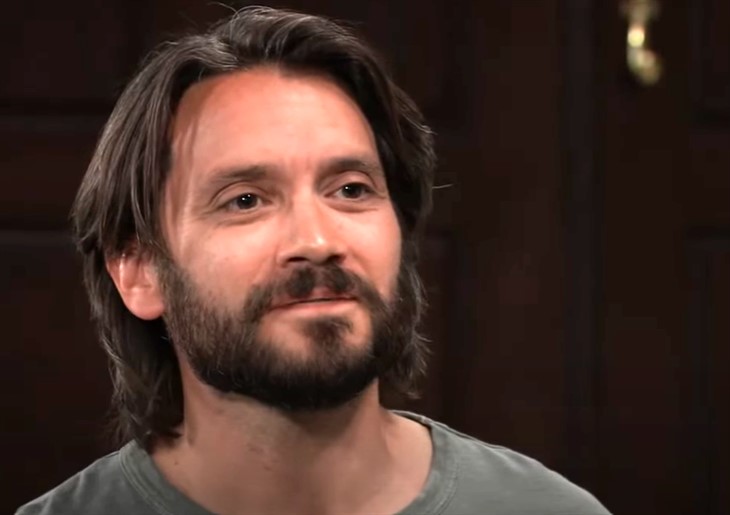 General Hospital viewers will recall that Dante lives in the Quartermaine mansion along with Brook Lynn Quartermaine (Amanda Setton) who is taking care of Louise as her baby with Valentin Cassadine (James Patrick Stuart) and named her Bailey. Valentin, Dante’s mother Olivia Quartermaine (Lisa LoCicero) and Michael Corinthos (Chad Duell), and Willow Tait (Katelyn MacMullen) have all bonded with the new baby but no one except Maxie Jones (Kirsten Storms) and Brook Lynn know of the plan for Brook Lynn to take Louise as her own.

Of course, things did not go as planned, and in order to throw Peter August (Wes Ramsey) off the track, Maxie told Anna Devane (Finola Hughes) and everyone else that crazy nurse Fake Chloe Jennings (Kimberly J. Brown) induced labor and ran off with the baby when she was born. No one has any idea that Peter is likely dead and Dr. Hamilton Finn (Michael Easton) and Elizabeth Baldwin (Rebecca Herbst) are covering it up, so of course, Maxie and Brook Lynn continue the ruse – even though the subject of signing those ELQ shares over hasn’t yet been broached with Valentin.

Maxie tells the same story to Dante when he questions her about the kidnapping but he knows her so well he picks up on something not quite true, and tries to get the truth out of her but then is interrupted by Sam McCall (Kelly Monaco) who tells him to back off. Dante does for the time being but still has to investigate the story.

GH Spoilers – Dante Falconeri Is Aided In His Investigation By Dr. Austin

General Hospital spoilers and recaps reveal Maxie was very lucky Dr. Austin (Roger Howarth) was hiking in the woods and got there just in time to deliver her baby. The only problem was is that crazy Chloe showed up and knocked him out with a fireplace poker. Maxie hung onto Louise and discovered an unstable group of boards which could have been anything from a bear trap – Austin did say there were bears there – or a boarded over well or old mine entrance, and she lured Chloe onto them.

Chloe of course fell through, and Maxie assumed she met her maker after looking down and seeing no movement on General Hospital. It was at that point she returned to Austin and called 911 for both him and her and for Brook Lynn to come and get the baby. Austin had been unconscious, so when he met up with her at General Hospital to see how she was, Maxie also told the same story to him! She was a little uncomfortable when he vowed to go back to the woods near Pautuck, New York, and help find Louise.

He said he knew those woods like the back of his hand, so when he finds out Dante is searching for the baby he offers his help. Dante and Austin will go back to the area and Austin will tell Dante there is an area they missed – likely where fake Chloe presumably fell to her death! If they check that out then they will find the nurse minus a baby at the bottom and Dante will know there’s something amiss and might figure out that the baby Brook Lynn says is hers is really Maxie’s! Austin delivered her and he may recognize her too!