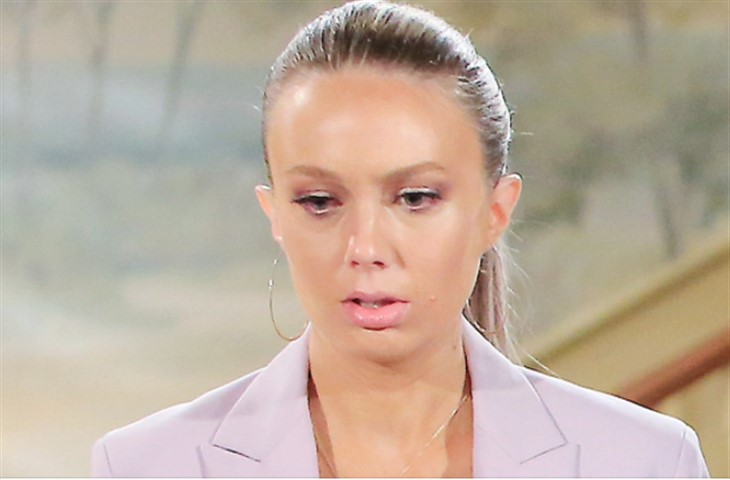 The Young and the Restless spoilers reveal that someone was standing over Abby Newman-Abbott-Chancellor (Melissa Ordway) while she napped. She wakes up when Nina Webster (Tricia Cast) comes home. Abby felt a presence but chalks it up to dreaming of her husband. However, could she be wrong? Is there someone hiding in the house?

The Young And The Restless Spoilers – That Looming Shadow

Y&R spoilers reveal that on Friday’s episode, we saw Abby napping on the couch. There was a figure standing over her. Although we didn’t see who the person was, the shadow resembled a man. At first, we wondered if Chance Chancellor (formerly Danny Boaz) had come home. However, after reading what Ordway had to say in Soap Opera Digest, we are convinced that someone is hiding in the house and it might put Abby in danger.

First of all, let’s start off with Abby waking up from her nap. Abby rouses and looks around her. She asks Nina if there is someone else in the house. She says that she doesn’t believe anyone else is there. Abby is convinced that she felt a presence. However, it is chalked up to Abby dreaming of Chance and desperately wishing he would come home.

The Young And The Restless Spoilers – Getting Bad News

The Young and the Restless spoilers reveal that Abby gets excited when she learns that Christine Williams (Lauralee Bell) has news about Chance. Abby is optimistic, but her hopes quickly crumble. She doesn’t get the news that she is hoping for. This doesn’t necessarily mean that Chance is dead. It could just mean that Christine has very limited information, as we saw last week when she made that phone call.

Now, back to the stalker theory. Chance’s whereabouts are pretty much unknown except he was in Las Vegas. As far as everyone knows, he is still alive but is on a dangerous mission. He might be kidnapped and held hostage. Maybe that’s what all the shouting and sudden disconnect were about. It could also explain Chance suddenly disappearing from the soap with no immediate recast.

If so, they could try to get to Chance by targeting Abby. Is it possible that it’s more than one person, too? Perhaps a group and one of them might be hiding within the four walls where Abby lives. This could not only put Abby in danger but the baby that Mariah Copeland (Camryn Grimes) is carrying, too.

The Young And The Restless Spoilers – Danger Brings Change Of Heart?

Going a step further, what if the baby being put in danger makes Mariah feel connected to the little boy? So much that she can’t let him go? These things happen all the time and are a big risk when choosing a surrogate. We will have to keep watching the CBS soap to find out.