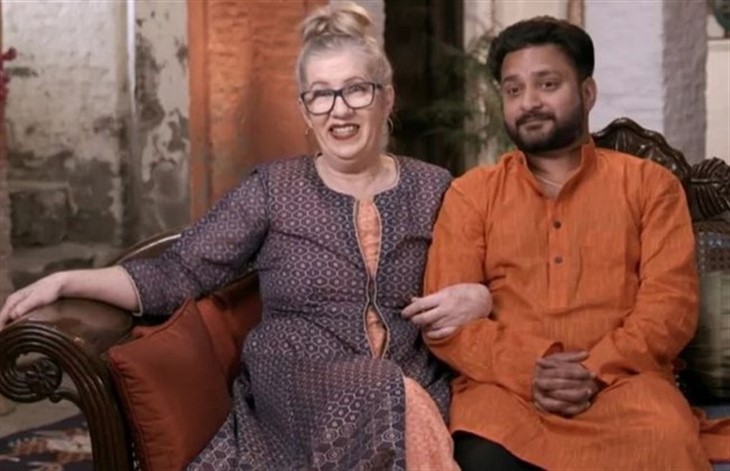 90 Day Fiancé spoilers tease that former 90 Day Fiancé-The Other Way couple Jenny Slatten and Sumit Singh have reportedly married in India after many hurdles to overcome including those posed by his own parents!

90 Day Fiancé fans will recall that Sumit’s parents were totally against his relationship with Jenny, because of her age. Jenny is twenty something years older than Sumit, and older than his mother Sahna, who threatened to commit suicide in a major attempt of a guilt trip directed at her poor son! Viewers want to know what happened with Jenny and Sumit after the 90 Day Fiancé-The Other Way season two finale. Jenny and Sumit could have married using an Arya Samaj wedding, but they didn’t marry during the show even though after several years and a boatload of money to do so, Sumit finally got a divorce from his wife.

Viewers will recall he was trapped in an arranged marriage with no love. However, the latest news is that they may be returning for a season three with wedding bands on their fingers and them officially, legally married to one another. Sumit started some wedding rumors recently when he posted some photos of himself on Instagram, all dressed up in fancy Indian duds. Fans gossiped about the possibility of a breakup with Jenny and a marriage to someone his parents deemed more appropriate, but that theory was shot down when it was revealed the photo was from a wedding of a friend or relative in 2016. Some thought it looked like the photo was for a dating profile, and Jenny and Sumit were in a long distance relationship during that time, with Sumit still married to his ex-wife.

TLC 90 Day Fiancé Spoilers – Jenny Slatten Nipped The Speculations In The Bud, But What Is Ahead For The Couple?

Jenny quickly nipped the breakup and marriage to someone else rumors in the bud, posting a selfie with Sumit and she in a very romantic pose. She noted that she and Sumit laugh at those kind of rumors, and even posted a video on her Facebook account from November 2020. At first glance, it appeared to be a regular Facebook “story” of her and Sumit having a meal in an Indian restaurant. But then some closeup shots of Jenny’s and Sumit’s hands revealed a sparkly gold and diamond ring on hers, and an equally nice looking ring on his, and they appeared to be a matched set!

Jenny did verify they were engaged but fans have thought more recently that they have finally married. Jenny answered a fan who wanted to know why she and Sumit were not on any current 90 Day Fiancé shows, with a statement “Stay tuned”. It sounds like there are some plans for appearances in future seasons. Also, a big clue popped up in April 2021 when Jenny’s daughter Christina referred to Sumit as “Pops” in a comment in Instagram. At the same time, Sumit posted on his Instagram page a recent visit by himself and Jenny to a posh hotel, and commented that they could only learn to love by loving.

Fans suspected the couple was on their honeymoon. Another question is how Jenny has been able to stay in India so long on a tourist visa, although the pandemic could have something to do with that as well. Jenny had posted a few months back that both had contracted Covid but said that they were recovered with no problems – that was prior to the purported honeymoon posts.