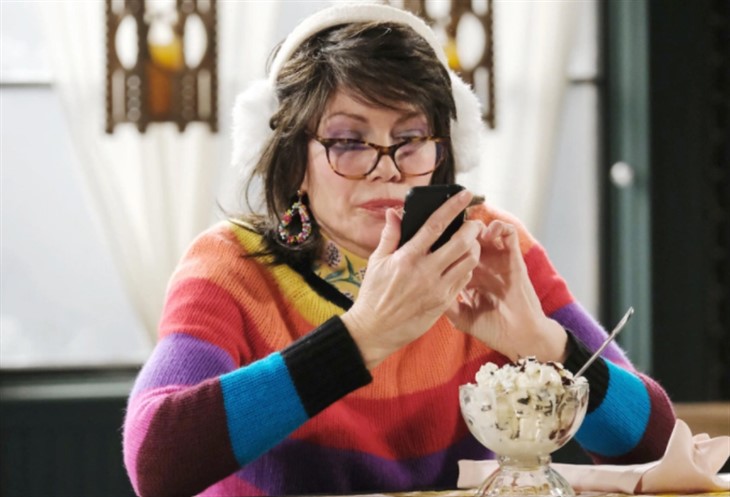 Days of Our Lives (DOOL) spoilers for the week of April 26 reveal that Kristen DiMera’s still wearing a Susan Banks (both played by Stacy Haiduk) mask. She tries to complete Vivian Alamain’s (Linda Dano) mission. She gives Jake DiMera (Brandon Barash) advice about his love life. Will she succeed in urging him to dump Kate Roberts DiMera (Lauren Koslow)?

DOOL spoilers reveal that Vivian agreed to keep Kristen’s secret and keep an eye on the real Susan. Kristen’s plan can’t succeed if Susan exposes the truth or if someone figures out she’s not the real Kristen. However, Vivian would only do it if Kristen did something for her. She is desperate for Kate to get away from Jake.

Kristen had weeks to take care of this and did nothing, which doesn’t make Vivian too happy. She plays hardball and Kristen realizes she needs to break up the couple now or she will lose everything, including Brady Black (Eric Martsolf).

Wearing her Susan mask, Kristen has a conversation with Jake. Somehow, the topic switches over to his relationship with Kate. Most likely, “Susan” will also bring up Gabi Hernandez (Camila Banus), who is now seeing Philip Kiriakis (Jay Kenneth Johnson). She gives him advice and due to Vivian applying pressure, she is stressed to get Jake to give up on Kate.

Days Of Our Lives Spoilers – He Doesn’t Take The Bait

Days of Our Lives spoilers reveal that Jake probably doesn’t take the bait. He has strong feelings for Kate despite their age difference. Kate also has pretty strong feelings for him. Also, Jake isn’t the type of guy that makes decisions about his relationships just because some crazy Salemite suggests it. Jake still won’t end the romance, even if “Susan” uses her psychic abilities and foresees terrible doom. Plus, he is still in deep denial about how he feels about Gabi and thinks she’s moved on with Philip.

We also know that Jake completely panics when Kate goes missing. So, that’s a pretty big clue that they stay together. At least, until Kate vanishes.

There is reason to believe that Kristen will pull out another magical mask of a Salemite. She already had Nicole Walker Brady’s (Arianne Zucker) and somehow got one within minutes of Sarah Horton (Linsey Godfrey). She probably has one of Kate tucked away somewhere, too. In fact, it wouldn’t surprise us if she has a mask of everyone in Salem!

When Kristen makes Kate disappear, she will pull a similar scheme to “Xarah.” She will put on the mask and break up with Jake, then make an excuse why she’s leaving Salem. However, will Jake fall for it as easily as Xander Kiriakis (Paul Telfer) did? We think Kristen’s time might be coming to an end if she tries this with Jake.

Royal Family News: Prince Harry Abandons The Queen On Her Birthday And Flies Home Instead