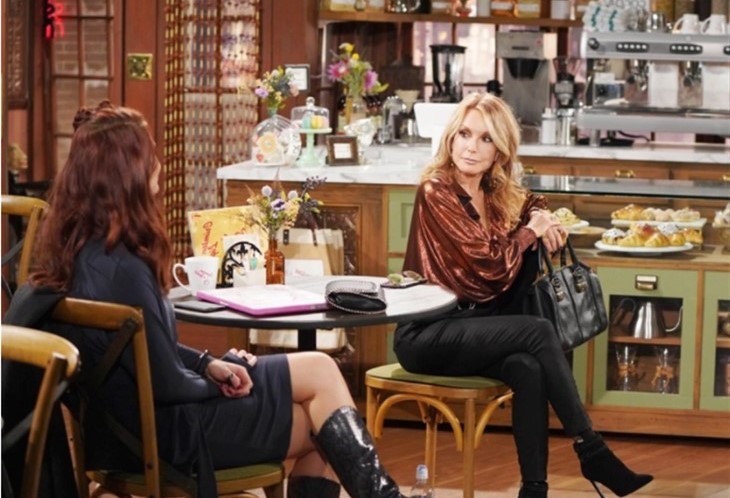 The Young and the Restless spoilers reveal that Sally Spectra (Courtney Hope) hasn’t had the fresh start she imagined in Genoa City. She is planning a trip to Los Angeles, but it is part of her scheme to get rid of Summer Newman (Hunter King). Interestingly enough, Hope confirms that Lauren Baldwin (Tracey E. Bregman) urges Sally to take a job back in L.A.

The Young And The Restless Spoilers – Failed Romance With Jack Abbott

Y&R spoilers reveal that Sally left L.A. after her scheme to get back together with Wyatt Spencer (Darin Brooks) failed. Wyatt and Flo Logan (Katrina Bowden) were so furious that they both wanted her to go far, far away. Sally certainly did that and eventually landed in Genoa City. Besides battling Summer on the job front, which led to attacks on each other’s personal lives, Sally found romance. She got involved with Jack Abbott (Peter Bergman). However, once he found out about her scandalous past, he cut off the romance.

Even though they are no longer together, Sally still thinks she can change Jack’s mind. However, she first plans on getting rid of Summer.

Sally has approached both Tara Locke (Elizabeth Leiner) and Ashland Locke (Richard Burgi) with her schemes. She wants Summer to take a job in Italy, but she will need someone from her past for help. That is what brings her to visit L.A. and reconnect with Eric Forrester (John McCook). He is on the board and can suggest Summer to Marchetti, which is located in Milan.

The Young And The Restless Spoilers – Lauren Baldwin’s Encouragement

The Young and the Restless spoilers reveal that Hope talked to Soap Opera Digest. During her interview, the actress confirmed that Lauren makes a suggestion to Sally. She encourages her to forget about Jack and take a new job back in Los Angeles. Even though Lauren likes the work that Sally does, she does realize that Sally might not be cut out for Genoa City. Sally’s antics are more in style with how people operate in places like Los Angeles.

Sally doesn’t take offense to Lauren’s suggestion and doesn’t think she’s trying to get rid of her. She knows that Lauren’s heart is in the right place. However, she also isn’t going to take her advice. In fact, it has the opposite effect and Sally becomes even more determined to win against Summer.

Hope explained to the magazine that Sally is going to gear up and fight even harder to get what she wants. The actress said,

“Sally has been through a lot of heartbreak and has a lot of goals in life. She still cares about Jack and thinks very highly of him. She also thinks highly of Lauren, and she’s thinking, ‘If I can make something of myself and my career…’ It’s always [about] proving that, ‘I’m not this person that everyone thinks I am, that Jack thinks I am,’ and deciding ‘If I can make a name for myself, maybe, just maybe, I can get some forgiveness from Jack.’”