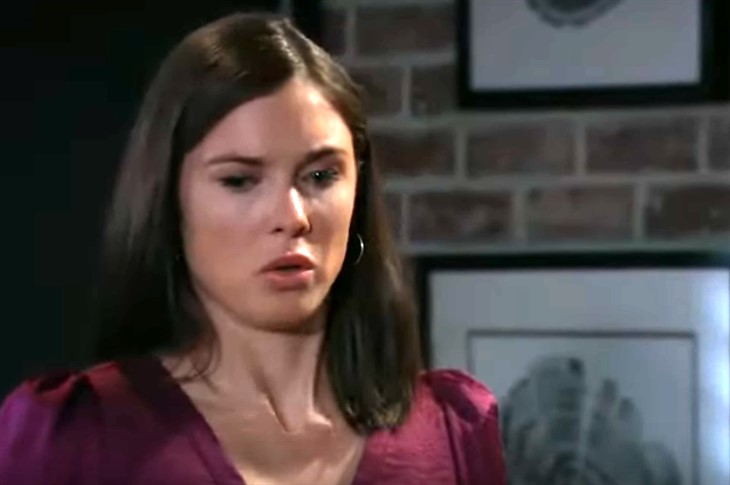 General Hospital (GH) spoilers for Monday, August 2, 2021, reveal in Port Charles, NY Willow finding a surprise at the Quartermaine door and Chase getting closer to being her husband in every sense of the word.

General Hospital Spoilers – What Will Willow Tait Do?

It’s Wiley’s birthday and also the birthday of the baby Willow (Katelyn MacMullen) now calls Jonah, who sadly died. Someone was at that baby’s grave and we have a feeling it was her mother, Harmony (Inga Cadranel). We also have a feeling that Harmony is the person at the door. Willow is surprised to see this person and it’s bound to make her life more difficult.

Chase (Josh Swickard) is making progress and Austin (Roger Howarth) sees that he can now stand on his own. He encourages his patient and new friend and seems to be up to something. Austin knows that Willow and Michael (Chad Duell) are seeing one another in an intimate way behind Chase’s back and wants to make sure Chase soon knows this, as well.

Jordan (Briana Nicole Henry) and Portia (Brook Kerr) have a serious conversation and Jordan mentions she didn’t know that Portia and Curtis (Donnell Turner) were now a couple. Portia is not quite sure what to say to Jordan and also not sure what to tell Stella (Vernee Watson) when Stella has a word with her. Stella is not happy at all and warns this woman to stay away from her nephew.

Meanwhile, Trina (Sydney Mikayla) and Curtis also have a little chat and she asks him straight out if he had been involved with her mother before now. Like Portia, Curtis is also at a loss for words.

For some reason, Nina (Cynthia Watros) returned to Nixon Falls and chose to miss Wiley’s birthday party, but that’s par for the course with General Hospital’s inconsistent storytelling these days. Nina continues to feel guilty on Monday. Does she feel guilty about missing Wiley’s party or does she feel guilty about continuing to keep ‘Smike’ (Maurice Benard) in the dark about who he really is? So far, she has seemed pretty fine with that but she’s bound to get caught sooner rather than later… Stay tuned to General Hospital weekdays to see how these stories play out.