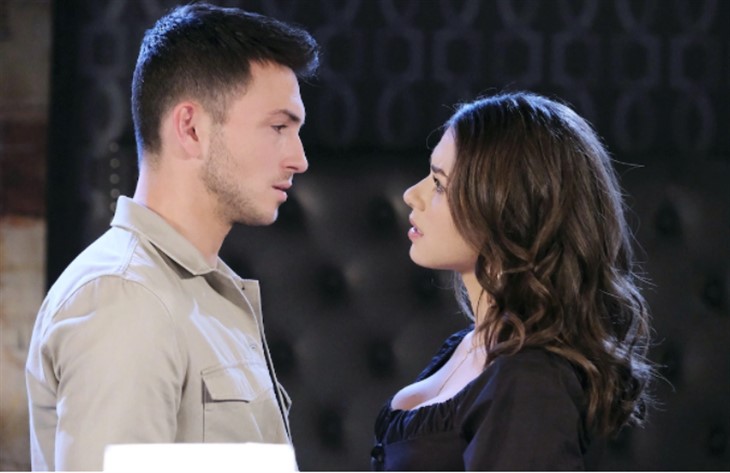 Days of Our Lives (DOOL) spoilers reveal that Ciara Brady (Victoria Konefal) shows up at Ben Weston’s (Robert Scott Wilson) door. She demands to know why he hasn’t signed the divorce papers and seems pretty desperate. Could she be pregnant with Theo Carver’s (Cameron Johnson) baby? If so, would Ben offer to raise the baby as his own if Ciara would just come home?

DOOL spoilers reveal that Konefal’s return as Ciara Brady has been confirmed. Head writer Ron Carlivati teased that it would be sometime this summer, although he wasn’t sure of the exact date. That day is coming up in the next few weeks, but don’t expect a “Cin” reunion. In fact, Ciara comes demanding to know why Ben hasn’t signed the divorce papers she sent him.

It is teased that Ben is taken aback by Ciara’s demand to know why he never signed the divorce papers. She didn’t send them that long ago and seemed to think that Ben would sign them the same day and return them to Africa. However, that didn’t happen because Ben was reeling over the “realness” of losing Ciara. Then, Claire Brady (Isabel Durant) was kidnapped and Ben stayed at the Horton cabin to think about his situation. Then, he burnt the divorce papers.

When Ciara returns, not only will she demand the signed divorce papers, but she seems rather desperate. Why does she need that divorce immediately?

Days of Our Lives spoilers reveal that one possibility is that Ciara might be pregnant. She hasn’t been with Ben since before her kidnapping, which was over a year ago. So, it’s impossible for her to be pregnant by him. That leaves the only father as being Theo. Perhaps she feels compelled to be married before having a baby. Remember, she’s living in Africa with Theo and what is socially acceptable there might be completely different from what is acceptable in the United States.

Ben would be shocked by the bombshell. However, he wants her back so bad that he might make her an offer. Could he suggest that he will raise the baby as his own if Ciara just returns to Salem? Ciara might not take that offer as she still views Ben as a serial killer. However, Ben is desperate enough to do just about anything. Let us know what you think is going to be the reason for Ciara needing the divorce immediately. In the meantime, keep watching the NBC soap to find out what happens with this storyline.