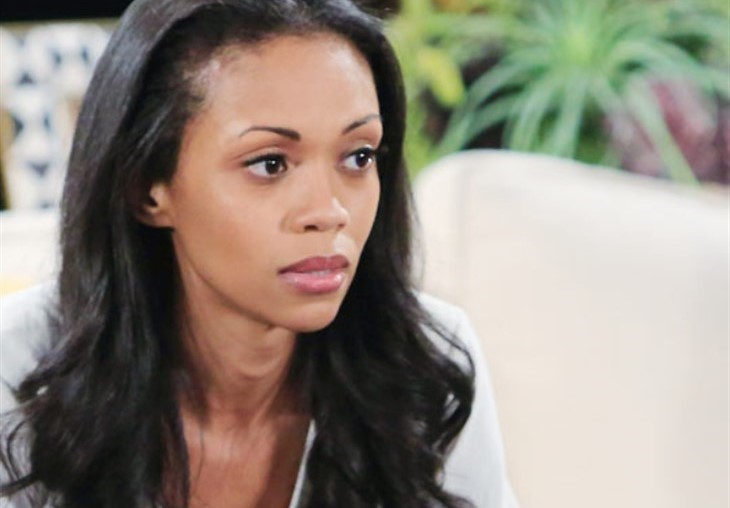 The Young and the Restless (YR) comings and goings reveal a familiar face leaving Genoa City while another familiar face is back. Karla Mosley’s temporary stint is up as Amanda and Michael Morgan will be back on our screens this week.

The Young And The Restless – Mishael Morgan Had Surgery

It was a shock to The Young and the Restless fans when Karla Mosley was suddenly playing Amanda Sinclair last month. Mosley was familiar to CBS soap fans as Maya Avant Forrester on The Bold and the Beautiful but they couldn’t imagine why she was playing Amanda.

It turns out an injury to Mishael Morgan’s cornea caused her to have surgery or she was in danger of losing her eyesight. Since Amanda was integral to the story, Y&R decided to recast rather than temporarily write her off the show. During the time Morgan was away, Amanda learned more about her family, grew closer to her biological mother, had words with her sister, Imani (Leigh-Ann Rose), and learned from Victor (Eric Braeden) that her father knew she had been born.

Just a few days after Mosley began airing, Morgan posted on social media that she was back on the set but she must have been gone longer than we thought because Mosley aired throughout the month of May. In fact, while Mosley was airing, she announced she also took to social media and announced she was pregnant with her second child.

Morgan is a wildly popular The Young and the Restless actress whose fans were devastated when she was killed off the show in 2018. Her original character, Hilary Curtis, was killed in a tragic car accident.

Y&R realized their mistake and hired Morgan back as Amanda Sinclair. At least everyone noticed she looked just like Hilary and eventually we learned she was Hilary’s long-lost twin (of course), so as we’ve learned more about Amanda, we’ve learned more about Hilary, as well. It turns out Rose was not her mother, just a cousin paid to raise her. Poor Amanda had to be raised in foster homes but made it on her own in the world as a lawyer. Stay tuned to The Young and the Restless to see what we find out about their father.