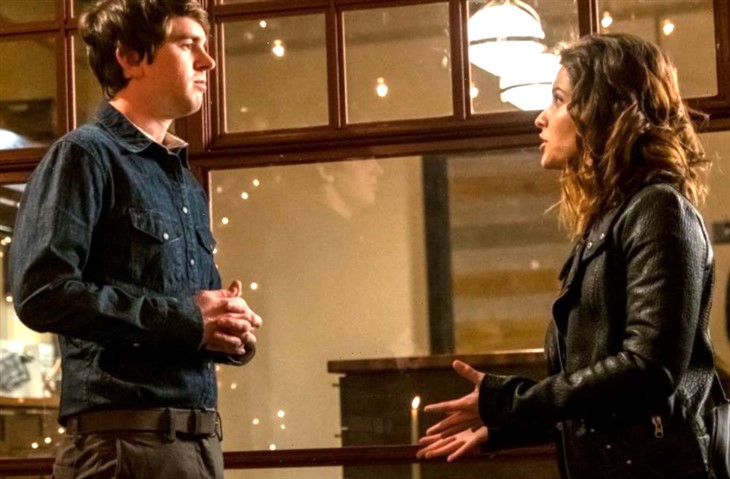 The Good Doctor season 4 spoilers confirm that episode 8 is titled “Parenting.” Dr. Shaun Murphy (Freddie Highmore) is getting ready to meet his girlfriend’s parents. He thinks their low expectations mean he’ll have no issues. However, Lea Dilallo (Paige Spara) stresses how important her parent’s opinion is and is worried. Is that a hint they still control Lea’s love life?

The Good Doctor season 4 spoilers reveal that Lea is ready to introduce Shaun to her parents. He already knows that Lea’s mom and dad didn’t like any of her other boyfriends, so he thinks it will be a breeze. However, Lea is a bit concerned that her boyfriend is not in the least bit anxious. Normally, Shaun being so relaxed would be a good thing. But Lea is freaking out inside and there is a reason.

She claims that her parents like to drop in unannounced, but it’s never for “just a visit.” She claims it’s an ambush and it’s so they can “judge.”

The Good Doctor season 4 spoilers reveal that Lea tells Shaun that her parent’s opinion is very important. He still doesn’t seem to really understand what she is saying, though. People do tend to make things worse when they are nervous, so Shaun being so relaxed could work in his favor. However, it also sounds like nobody is good enough for their daughter. Low expectations do not necessarily mean low risk.

In the promo clip for episode 8, Lea looks like she is in total panic mode. While it’s normal for young women to be nervous about the boyfriend meeting the parents, this seems to go beyond that. How much do they know about Shaun? Are they aware that he has an autism diagnosis and that he might respond in unexpected ways to certain stimuli? Lea is still worried about what her parents will think about Shaun, but he doesn’t think it should matter because they are two consulting adults.

It’s possible that if Shaun doesn’t make a good impression, Lea will still be with him. But her parents could make things harder for the couple. But what if Lea is one of those people who have parents that have never let go of the reins? There are still parents out there that control their adult children’s lives to a certain degree. Sometimes, the parents will use something as leverage in order to force their children to make certain decisions. Could this be the case with Lea’s parents? If so, will they end up forcing her to choose, and does she really love Shaun enough to give everything up?

Of course, everything could go just fine too. Who knows, Lea’s parents might adore Shaun and find him to be very charming. Her fears might be more about herself than Shaun. After all, she did mention Dr. Aaron Glassman (Dr. Schiff) still not like her.

Be sure to catch up on everything happening with TV right now. Come back here often for The Good Doctor spoilers, news, and updates.