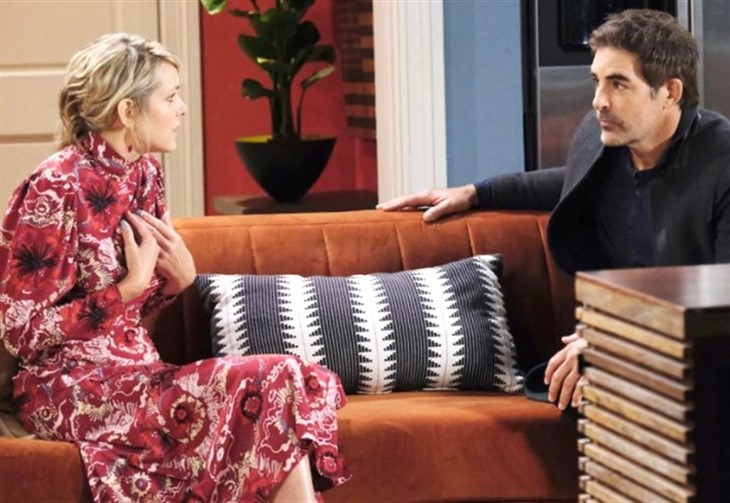 Days of Our Lives (DOOL) spoilers reveal that in Salem during the week of February 1, Eric Brady (Greg Vaughan) is supposed to come home. However, Nicole Walker Brady (Arianne Zucker) gets bad news, then is comforted by Rafe Hernandez (Galen Gering). Have outside forces once again prevented “Ericole” from being together? Could this be the final straw for her?

Days Of Our Lives Spoilers – Eagerly Waiting For Eric Brady

DOOL spoilers reveal that Eric informs Nicole that he is coming home. We are not sure if it’s just for a visit or if he’s coming home for good. Either way, Nicole is so excited she can barely contain herself. She spends a lot of time making the apartment look perfect. She cooks his favorite meal, makes sure every hair is in place, and probably even ordered new lingerie.

Eric and Nicole have often faced obstacles to being together. It always seemed like fate was intervening and pulling them apart whenever “Ericole” got close. We thought that was over with when the two got married. Then he jetted off to the Congo to help villagers there. He keeps planning visits back to Salem, but something always happens. Canceled flight, bad weather, he missed the plane or something else happens. Nicole hasn’t had much luck getting to him, either. Unfortunately, it seems like Nicole will once again get bad news and Eric won’t be able to make it home once again.

Days of Our Lives spoilers reveal that when Nicole gets the news, Rafe will be there to comfort her. Now, the word used to describe the “bad news” wasn’t tragic, devastating, or even shocking. The word used was “upsetting,” so that doesn’t indicate anything bad happens to Eric. But it does suggest that Nicole will be disappointed once again.

It is already confirmed by the soap that Nicole will be paired up with Rafe, but fans were wondering what happens to “Ericole.” It’s possible that Nicole is struggling with being married but without a husband much more than people realize. She not only is alone but raising her daughter by herself again. There is all the drama with Allie Horton (Lindsay Arnold), Tripp Dalton (Lucas Adams), Charlie Dale (Mike Manning), and Ava Vitali (Tamara Braun). She could have used his support. Before that, it was Sami Brady (Alison Sweeney) and trying to get temporary custody of Henry Horton (Jayna and Kinsley Fox). Plus, Brady Black (Eric Martsolf) gets shot and fights for his life.

All of this she will be handling on her own and it might all just be too much. She could decide that even though she loves Eric more than anything, she can’t keep living life as a non-married woman. She might end up asking Eric to grant her a divorce. What do you think happens with Eric, Nicole, and Rafe?

90 Day Fiancé Spoilers: Jenny Slatten Walks Out On Sumit Singh After His Parents Insulted Her Looks