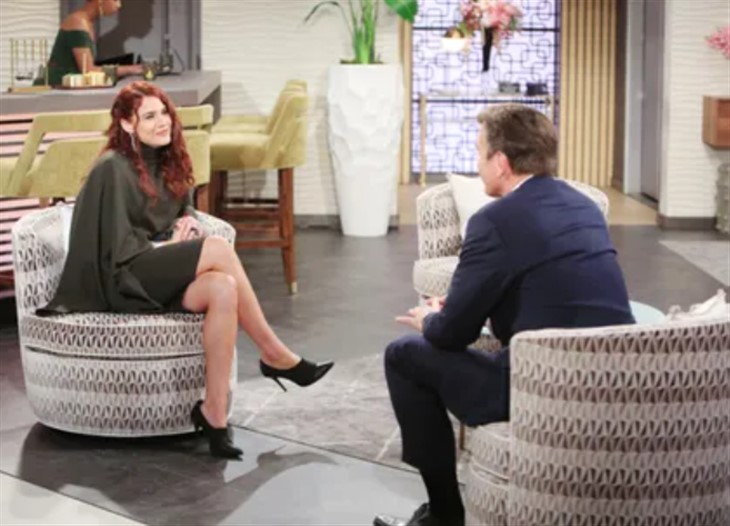 New Young and the Restless (Y&R) spoilers and rumors document that Sally Spectra (Courtney Hope) likes Jack Abbott (Peter Bergman). He feels the same about her and has taken Sally under his wing. But will these two characters become Y&R’s next great couple?

Y&R comings and goings reveal Sally’s arrival in Genoa City, Wisconsin, was forced. She had to leave Los Angeles, California, but fortunately was welcomed by Lauren Fenmore (Tracey Bregman). The head of Fenmore’s gave Sally a nice starter job and will likely enable her advancement.

Along with the above, Sally is getting to know Jack on The Young and the Restless. He’s single, somewhat vulnerable, and open to new ideas.

Jack believed that his mother was sending him a message during the last part of her life. He thought that an old family video, where the then Dina Abbott (Marla Adams) carried him as a baby into the mansion with John Abbott (as played in his older version by Jerry Douglas) represented a signal in modern times.

Bergman’s character wanted to believe that his mother, who was suffering the ravages of Alzheimer’s, wanted him to resume his search for love. That implied Jack would seek romance in the future, which has now arrived.

Sally is a driven individual. But she’s made a number of mistakes through the years that cost her dearly because she didn’t have a strong force in her corner to counterbalance some reckless impulses and realized actions.

Jack can be the man for Sally, possibly as a mentor, maybe as a confidant, or potentially as an unlikely romantic match. Sack or Jally are the offered nicknames for this projected couple, assuming Sally and Jack become that.

This pairing would surely turn heads and spark a lot of extended emotional responses. The age difference, what each personality brings to the table, and the intriguing possibility of what Jack and Sally would generate as a pairing would produce good soap.

The Young And The Restless (Y&R) Spoilers & Rumors: Devon And Elena Aren’t Over – What About Amanda?https://t.co/DNj6dtU22L

The Young And The Restless Spoilers – Winter Storm Arrives

Teasers indicate that a harsh winter storm will allow Sally to spend some one-on-one time with Jack. This will follow their recent conversation, where Sally offered a modest reveal of her past in LA.

Sally is naturally hesitant to openly discuss why she really left California. She’ll need to take a risk with Jack in order to do that. But if she does, then speculation will be furthered about what might happen next with this duo.

SOS is a leading source for everything linked to The Young and the Restless spoilers. Check back regularly for Y&R comings and goings spoilers recaps, and news!