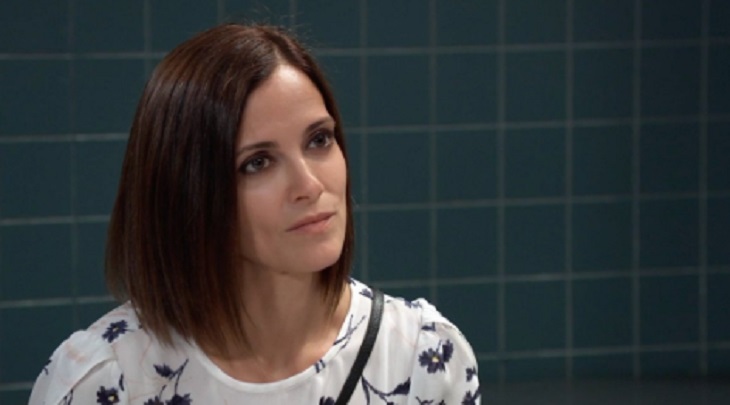 The General Hospital weekly promo video, “Secrets” shows that Valentin Cassadine (James Patrick Stuart) will put the pressure on Hayden Barnes, after realizing that the portrait of Helena Cassadine (Constance Towers) which he had previously thrown out contained valuable secrets! Charlotte Cassadine (Scarlett Fernandez) was frightened by the painting and so he got rid of it. However, Dev Cerci (Ashton Arbab) came across the painting and sold it to Ava Jerome (Maura West) for a hundred dollars.

Recalling that Hayden had been snooping around in Helena’s old trophy room at Wyndemere, where the portrait had previously been, he comes to the conclusion that she was looking for something within the portrait but was caught by Liesl Obrecht (Kathleen Gati) before she could find what she was looking for. He confronts Hayden, and tells her things are about to become very unpleasant if she doesn’t give him the answers he needs. He will offer money to her for intel on what is so important about the portrait and she almost caves.

Meanwhile, Nikolas Cassadine (Marcus Coloma) followed Hayden Barnes and was eavesdropping while Valentin pressured her to tell him about the painting. Later, Nikolas will summon her to an urgent meeting – on the docks! She will be nearly abducted by a man in a hoodie sneaking up behind her, and then Nikolas will tell Hayden that she needs to go into hiding; he fears that Valentin might kill her. As General Hospital viewers will recall, Hayden had just taken over Kim Nero’s (Tamara Braun) apartment, and was getting ready to move in with her and Dr. Hamilton Finn’s (Michael Easton) daughter Violet.

It can be implied that once again Hayden will pull a disappearing act because it will be too dangerous for Finn to know what is happening and that she is going into hiding. She won’t want to pull Violet away from the father she has just found but she won’t want to be traced by keeping communication with Violet or Finn either; it would probably be a better idea if she brought Anna Devane (Finola Hughes) in on the problems, but then she might find out Nikolas is alive and Hayden doesn’t want to expose him, either.

General Hospital Spoilers: Charlotte Sees A Picture Of Nikolas! Who Will She Tell That She Saw Him Alive And Well! https://t.co/SDRtlQKLKE pic.twitter.com/9lCDdnOMxs

Will Hayden bring Violet to Finn to babysit when she flees town? She and Violet will likely not have had the chance to move their things into Kim’s old apartment, so chances are Violet’s things will be at Elizabeth Baldwin’s (Rebecca Herbst) home. That way at least Finn will be able to get Violet’s things from Liz as he will need to be full time father to her once Hayden disappears! But any chance she may have had in the future with Finn will disappear with her!