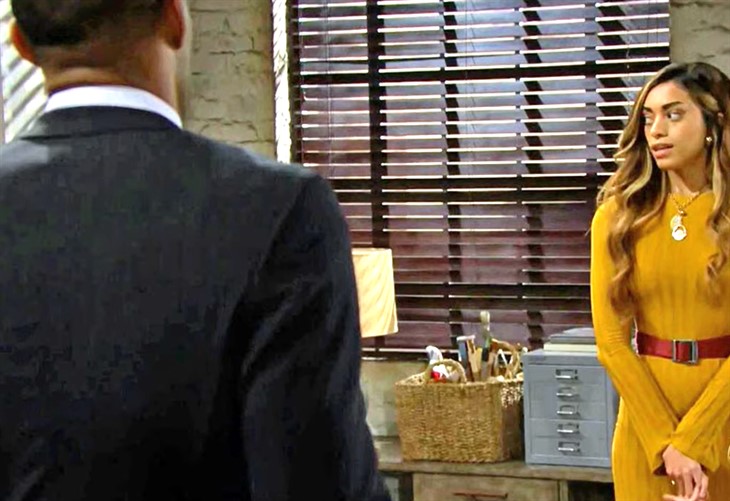 The Bold and the Beautiful (B&B) spoilers reveal that in Los Angeles Carter Walton (Lawrence Saint-Victor) will confront his fiancee about Ridge Forrester’s (Thorsten Kaye) claim. She may decide that it’s time to tell Carter the truth, but not everything. Could she finally say that they can’t get married? If so, don’t expect Carter to simply accept it. He will push for her to change her mind.

The Bold And The Beautiful Spoilers – Carter Walton’s Confrontation

B&B spoilers reveal that Zoe Buckingham (Kiara Barnes) won’t stop trying to get Zende Forrester (Delon de Metz) to admit he has feelings for her. Despite being shot down last week, she will put a major move on him next week. It is an act that is seen by Ridge, who is later asked to be Carter’s best man. It is suggested that Ridge may end up telling Carter what he saw. He will be in disbelief at first, but will ask Zoe about what Ridge told him.

Even though Carter can’t think of anything he wants more than to marry Zoe, all she is thinking about is having her cake and eating it too. However, when she is confronted by Carter and knows her seduction was noticed by the big boss, she could have a change of heart. She may end up telling Carter that she can’t marry him. But will she tell him the truth about why? Probably not.

The Bold And The Beautiful Spoilers – Pushing Zoe Buckingham

The Bold and the Beautiful spoilers reveal that when Zoe suddenly says she can’t marry Carter, he will want to know why. Eventually, she might mention Zende, but she will make sure that she looks like the good girl in this story. We know that Carter sets boundaries with Zende when it comes to women. So that tells us that Carter blames Zende for his canceled marriage. Despite having his engagement suddenly canceled, don’t expect Carter to give up on Zoe. He will keep pushing her because he’s done that with everything in their short relationship.

When Carter first was interested in Zoe, she wasn’t ready to dive into another romance so soon after Thomas Forrester (Matthew Atkinson). Then, he asked her to move in before they had even slept together, much less go out on a real date. When she hesitated and said she wanted to take things slow, Carter didn’t accept that. He kept pushing and asking and telling her how wonderful it was going to be. He even bought Ridge’s old place to replace his bachelor pad before knowing if Zoe was going to say yes.

These are unhealthy patterns in this relationship and he will likely continue them. So, when Zoe tries to let him down easy, he won’t get the hint and will continue pushing her to walk down the aisle. Will it be a decision that he ends up regretting?