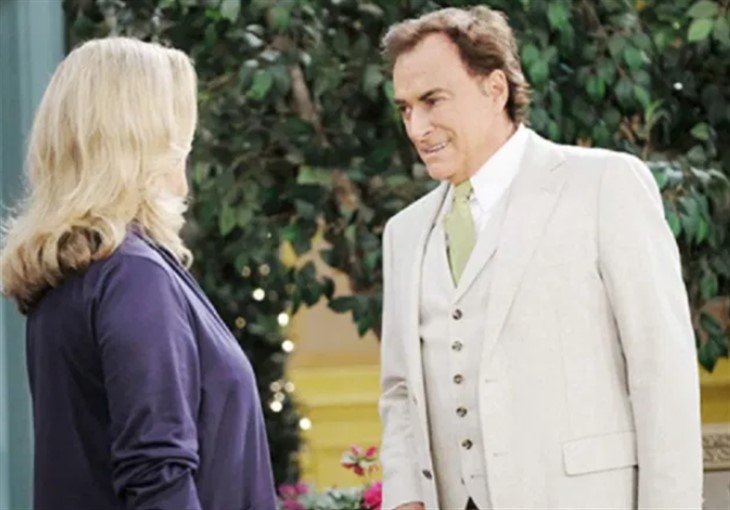 Days of Our Lives (DOOL) spoilers reveal that we have seen Tony DiMera and Anna DiMera return to Salem and get involved in a few different storylines. Actors Thaao Penghlis and Leann Hunley recently opened up about coming back to the soap. They discussed “another dimension” and what they meant by that. Keep reading to get the details!

DOOL spoilers reveal that a few months ago, Thaao had teased his return to the NBC soap. At the time, he shared a photo of himself with co-star Deidre Hall. The actress plays Dr. Marlena Evans, but has also performed double duty by portraying Hattie Adams. Even though Thaao didn’t mention Leann, fans figured she would be with him. After all, Tony and Anna are married and she didn’t handle his previous “death” very well.

She literally carried Tony’s urn of ashes with her everywhere. She would place the urn on a table while she sipped cocktails. She took it everywhere with her and kept it safe in her purse. She was wildly shooting in Europe while chasing Stefano DiMera (Joseph Mascolo) and still had Tony’s ashes with her!

Anna might be a bit out of control sometimes, but she does have deadly accurate gut feelings. She was right about Tony and she is right about Gwen Rizczech (Emily O’Brien). She warned Abigail DiMera (Marci Miller) and next week, she will share some words of caution with Jack Deveraux (Matthew Ashford).

Days Of Our Lives Spoilers – Actors Talk ‘Another Dimension’

Days of Our Lives spoilers reveal that in the newest issue of Soap Opera Digest, the actors talked about coming back to the NBC soap. Thaao mentioned “another dimension,” but don’t panic, he didn’t mean in the actual soap. He was talking about COVID-19.

“Now that we’ve gone back, it’s kind of interesting because there’s another dimension, which is even tougher than it was before, and that is with COVID, you can’t even rehearse with your actors and so you really have to be on the ball…”

As for what Tony and Anna are getting involved in, they will be interacting with more than just those in the DiMera mansion. They will be part of the Gwen bombshell and Li Shin’s (Remington Hoffman) decision. But they will be worried about the big changes with DiMera Enterprises. We also know that they will be interacting with Jack and Jennifer Horton (Cady McClain). Plus, expect Tony to have more prison visits with Kristen DiMera (Stacy Haiduk). Along with all of that, expect Anna to likely help reunite “Chabby.” Tony and Anna will also make some time for romance.