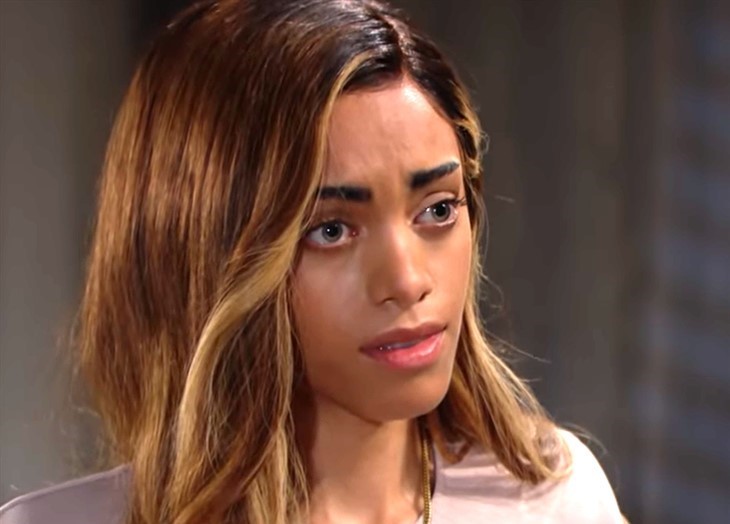 The Bold and the Beautiful (B&B) spoilers document that Zoe Buckingham (Kiara Barnes) made a major mistake that is already producing blowback. Confronting her sister, Paris Buckingham (Diamond White), was wrong.

As Paris said, why would she not be interested in a single, available man, Zende Forrester Dominguez (Delon de Metz) who has expressed an interest in her? Paris’ logic makes complete sense. But Zoe isn’t thinking logically. She’s been acting on emotion, which has nothing to do with the best interests of her younger sister, or Forrester Creations.

The Bold And The Beautiful Spoilers – Talking Herself Into A Corner

Zoe seemingly didn’t realize that she was revealing her inner thoughts and desires. By responding as she did to Carter Walton (Lawrence Saint-Victor) Barnes’ character lit a flame that could potentially damage her own reputation.

Challenging Carter’s idea to have Paris work at the Forrester Creations Foundation wasn’t rational on any level. Paris just graduated from college, has a volunteer history that is relatable, and most importantly has the desire to help people. Those qualities were recognized by Carter and Ridge Forrester (Thorsten Kaye) as fully applicable.

Zende might have a choice to make if Zoe forces the issue. Both people know that they have a spark between them. However, Zoe was open about wanting to marry Carter and hasn’t pursued anything more than verbal flirting with Zende so far.

For his part, Zende has been respectful of Zoe’s engagement, while also offering respect for Carter in doing so. He’ll need to stay that course in order to avoid drama.

The kiss that happened between Paris and Zende would generally represent the start of a normal path to a relationship. But it feels as though Zoe will try to have a say in that part of Paris’ life as well.

Zoe seems to have forgotten that the Forrester family gave her a second chance when it didn’t have to. The involvement that she had with Reese Buckingham (Wayne Brady) in the Beth Spencer (Madeline Valdez and River Davidson) debacle was wrong, but came to be seen as an unfortunate circumstance rather than fully reflective of her own judgement.

But the Forrester family will take notice if Zoe causes Zende to be drawn into a messy personal situation and also creates disruption for Paris at the Foundation. Zoe has been working hard to restore her reputation. But she seems intent on sabotaging herself again.

SOSis a leading source for everything linked to The Bold and the Beautiful. Check back regularly for B&B spoilers and news!