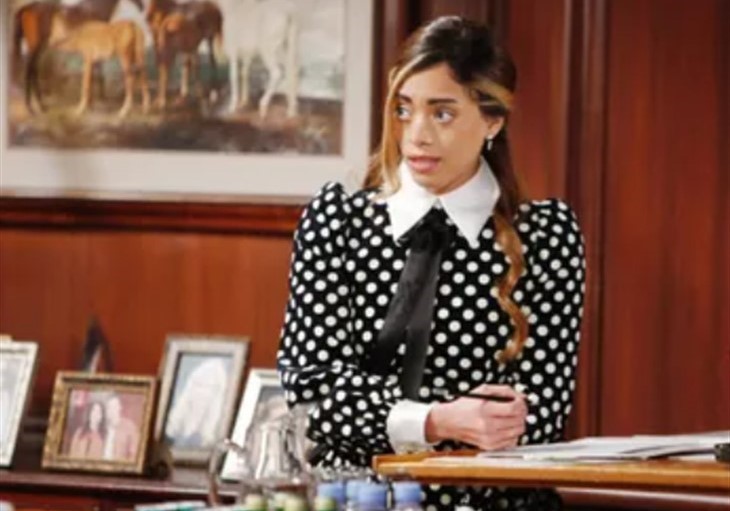 The Bold and the Beautiful spoilers for the week of January 25 reveal that Zoe Buckingham (Kiara Barnes) will have some explaining to do. Ridge Forrester (Thorsten Kaye) catches her behaving inappropriately with Zende Forrester (Delon de Metz) in the office. He tells Carter Walton (Lawrence Saint-Victor), but Ridge could also fire Zoe for sexual harassment.

The Bold And The Beautiful Spoilers – Emergency Flirting Session

B&B spoilers reveal that Zoe is disappointed and angry to find out that Paris Buckingham (Diamond White) is staying in town. She’s also upset that her little sister is taking the job at the Forrester Foundation. She rants about how wrong it all is, but Paris doesn’t seem to understand what the core issue is, and neither do viewers. Then, Zoe is flabbergasted to learn that Zende and Paris kissed.

Barnes already confirmed to Soap Opera Digest spoilers that Zoe has been abandoned by every man in her life. She fears Carter will leave her too, so she has a back-up man, which is Zende. Now that Paris is sticking around and now has a romance with Zende, she panics. Zoe puts a plan into action and does some “emergency flirting” at Forrester Creations.

While Zoe is trying to seduce Zende, neither of them are aware that they are being watched. Ridge warned Carter to be careful around Zoe and he’s never trusted her. He’s been watching her and now he knows she’s no good. Ridge considers Carter to be a good friend, so he is furious to see Zoe putting the moves on another man so shamelessly.

We know that Ridge will tell Carter what he saw, but he could decide to take things a step further. They took a big risk by allowing Zoe to come back to the company. If she is going to create drama, cause division or be a public relations nightmare, then she has to go.

The Bold And The Beautiful Spoilers: – Zoe Buckingham Fired

The Bold and the Beautiful spoilers indicate that there is a chance that Ridge could fire Zoe. Of course, Carter remains with the model even after he finds out about Zende. In fact, it seems that Zende is the one who gets punished by Carter instead of Zoe. So, it seems she lies her way out of taking responsibility. Carter might even get Zoe her job back, but it won’t be easy.

In any workplace, putting the moves on a coworker could be considered sexual harassment. If Ridge is angry enough, he could use this as a reason to terminate Zoe immediately. However, there has to be someone that complains. Even though Zende is irritated with Zoe and is in a romance with Paris, he could deny feeling uncomfortable. Not because he necessarily wants to protect Zoe, but because he is trying to keep the peace. However, that could prove to be a big mistake and Zoe will continue trying to get rid of her sister. Just how far will she go?