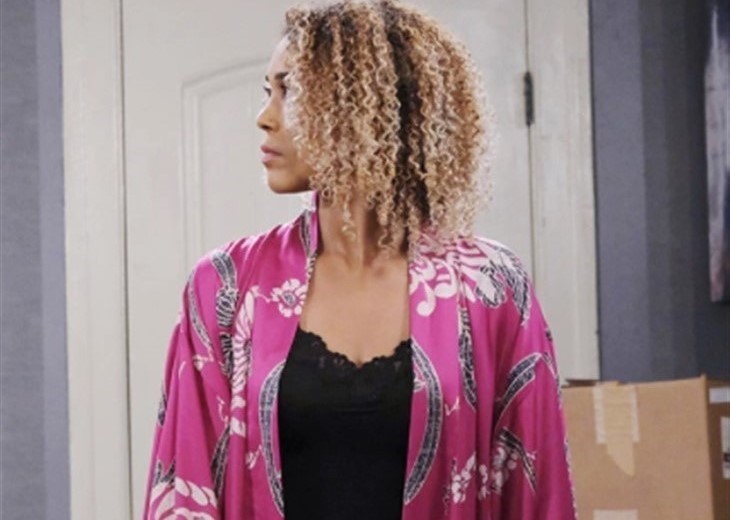 Days of Our Lives (DOOL) spoilers tease that in Salem whenever there is a baby (or babies) snatched from their parents in Salem, Dr. Amanda Raynor is involved. Viewers may remember that during the one year time jump both Dr. Sarah Horton (Linsey Godfrey) and Kristen DiMera (Stacy Haiduk) gave birth on Mother’s Day. Unfortunately, Sarah and Adrienne Kiriakis (Judi Evans) were run off the road on the way to University Hospital. Adrienne died shortly thereafter while Sarah gave birth on the side of the road.

Days Of Our Lives Spoilers – Dr. Amanda Raynor Was Told To Never Come Back To Salem!

Xander Kiriakis (Paul Tefler) and Victor Kiriakis (John Aniston) were in the maternity ward when Xander realized that Sarah’s baby had stopped breathing. Dr. Raynor had just delivered Kristen’s healthy baby even as she had to tell Xander and Victor that Sarah’s injuries from the car wreck were too severe and her baby died. The Kiriakis men knew they had to act fast so while she was out of the room, they switched the babies.

Dr. Raynor was appalled but agreed to help them after they both threatened her and paid her quite a bit of money. She allowed Kristin to believe her daughter had died. But as time went on, Dr. Raynor’s guilt got the better of her. Xander threatened to kill her if the truth got out. Eventually she moved to New York City where she stayed until Nicole Walker (Arianna Zucker) finally found her and got her to confess the entire sordid story.

DOOL – Who Is Dr. Amanda Raynor Taking The Twins To?

After realizing that the doctor had no real choice in her actions Nicole didn’t seek any type of legal accountability. She had every opportunity at a second chance so it begs the question what or who was drastic and dramatic enough that Dr. Raynor kidnapped a set of newborn twins right from the maternity ward? Two things spring to mind , fear and money. One theory is that after seeing a picture of Brady Black (Erik Martsolf) and Chloe Lane (Nadia Bjorlin) platonically kissing on New Years Eve, Kristen snapped.

She only went to prison to keep Lani Price (Sal Stowers ) from being arrested and going to jail herself for helping Kristen evade the law. But if Kristen believes that she’s losing Brady anyway, she might blame Lani. And when Kristen gets upset, she becomes dangerous. But she’s in jail, so if she really is after Lani now, she would need help.

Days Of Our Lives Spoilers – Could The Kidnapping Actually Be Kristen DiMera’s Sudden Need For Revenge?

Kristen is probably the only person in the world who could manipulate Dr. Raynor into helping her. After all Kristen lost the first year being with her daughter because Raynor told her Kristen that her daughter was dead. But it’s hard to imagine actually keeping the babies herself for very long. Which means that would have to have another accomplice, someone who has hated Lani for a very long time and that would most likely be Vivian Alamaine (Linda Dano).

It was just past summer when Vivian returned to Salem, still blaming Lani for shooting and killing Vivian’s son, Stephan DiMera (Brandon Barash). Vivian had been trying to run so she could avoid prison. So even as Lani fired her weapon, Stephan jumped in between the bullet and his mother and died shortly thereafter. So on Lani’s wedding day, Vivian tried to kill her but was caught and taken into police custody instead. Not long after that, Vivian faked her own death to keep from facing jail time. But even as she left town, her hatred of Lani festered.

The truth is that Kristen probably isn’t involved in the kidnapping plot at all even though it would be a shocking reveal and would go a long way toward explaining how Dr. Raynor is involved. The cruelty it would take to take two newborn babies away from their parents sounds right up Vivian’s alley. It should be interesting to see why Dr. Raynor would even consider getting involved in this kind of mess once again. But with Vivian coming back to Salem anything can happen.

Who is responsible for kidnapping the twins? Who is Dr. Amanda Raynor bringing them too. And why would she even put herself back in another situation like this? Is Kristin pulling some kind of ultimate con job or is Vivian back to take Lani’s children from her. Salem is full of people with hidden agendas so stay tuned to Days of Our Lives airing weekdays on NBC! And don’t forget to check back right here regularly for all your Days of Our Lives news, information and spoilers!