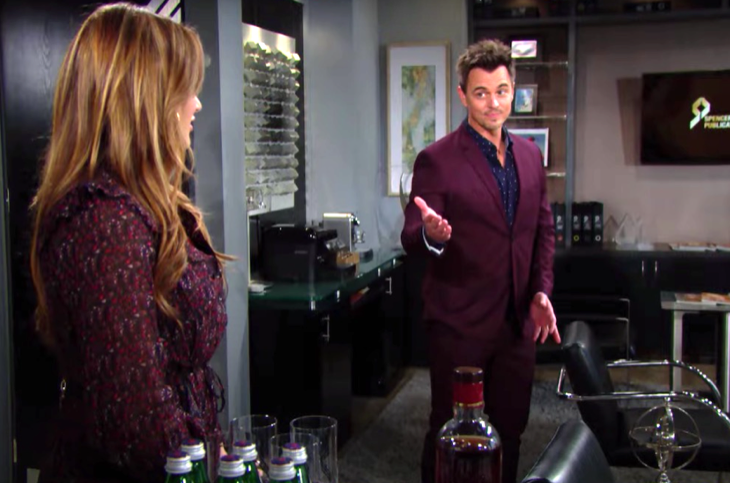 B&B and Y&R spoilers say that Summer Newman (Hunter King) has arrived at this fictional town of Los Angeles and she’s on a mission to find out as much as possible about her rival, Sally Spectra (Courtney Hope). In fact, she wastes no time in trying to get both Wyatt Spencer (Darin Brooks) and Flo Fulton (Katrina Bowden) to tell her everything that she needs to know. Read on for all of the latest spoilers.

The Young And The Restless Spoilers: Eric Braeden Says Farewell To A Dear Friend

Speaking to Soap Opera Digest in a new interview, actress Hunter King, who plays Summer Newman on Y&R, says that her character knew exactly what she was doing when she did her best to pump intel from Wyatt, who seems to have some reservation about wanting to tell her the truth. Even though she’s in L.A. to talk business, Summer surprises everyone at Spencer Publications by bringing up Sally Spectra’s name.

Hunter puts it this way, “Summer also notices that Wyatt seems a little tense. So, Summer doesn’t get a whole lot of information but from the little she hears, she’s even more determined to find out what she can about Sally Spectra.”

The Young and the Restless Spoilers: Naya Isn’t Pleased To See Amanda At Her Doorstep Demanding Answers https://t.co/2spI7I0p5G

The Bold and the Beautiful spoilers then tease that Flo Fulton swings by and hears Wyatt talking to Summer about Sally. Actress Katrina Bowden says that it’s no secret that her character is no fan of Sally and that she’s willing and ready to help Summer by giving her all of the information that she needs.

Katrina says, “Flo happens to come into Wyatt’s office and Summer is there asking questions about Sally, and Flo is immediately intrigued. Wyatt is really not saying a lot about Sally because he’s such a nice guy. He never wants to throw anyone under the bus. He’s being very generic with his answers and Flo is ready to step in and share more than Wyatt intends to share.”