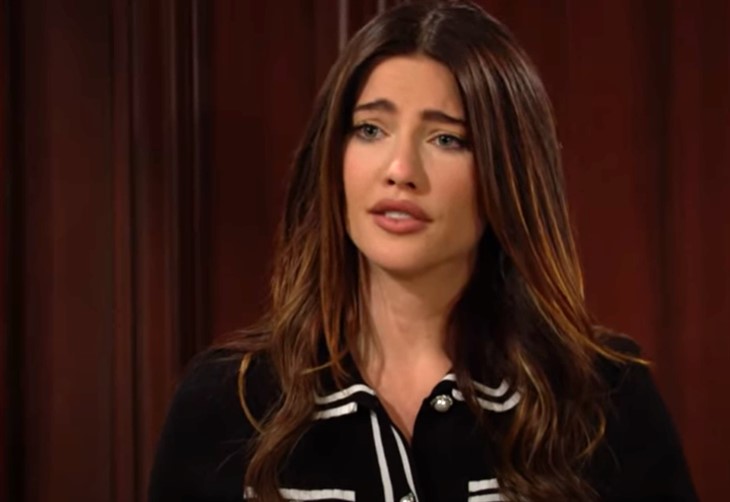 The Bold and the Beautiful spoilers reveal that Steffy Forrester (Jacqueline MacInnes Wood) visits Liam Spencer (Scott Clifton) in jail. She is still in disbelief over the news that Liam confessed to being the driver that struck Vincent “Vinny” Walker (Joe LoCicero). It’s an emotional visit and we imagine Liam will have a special message for her.

The Bold And The Beautiful Spoilers: – Ridge Forrester’s Bombshell

B&B spoilers reveal that Ridge Forrester (Thorsten Kaye) told Steffy and Thomas Forrester (Matthew Atkinson) the news about Liam’s arrest. Brooke Logan Forrester (Katherine Kelly Lang) tried to defend Liam not coming forward earlier. Even though she claimed that Bill Spencer (Don Diamont) gave Liam “no choice,” Ridge called her out on that statement. He had plenty of opportunities to call the police or go to the police station. He just chose not to and no one is at fault for that except Liam.

Steffy will be reeling over the bombshell, especially when she realizes that Liam is facing a murder charge. If convicted, he could go away for years. Steffy decides to pay a visit to Liam at the jail. Even though they are former flames, they do share a child together.

The Bold And The Beautiful Spoilers – Emotional Visit With Liam Spencer

The Bold and the Beautiful spoilers reveal that Steffy will be emotional during her visit to Liam. Even though some fans might assume she still has feelings for Liam, that’s probably not the case. Despite moving on with John “Finn” Finnegan (Tanner Novlan), Steffy will always care about Liam. They were married and share a child together. Plus, she is still pregnant, so that might also factor into her emotional reaction.

We imagine that Liam will have a special message to share with Steffy. Just like his request to Thomas, it seems Liam is preparing to go to prison for many years. He will likely tell Steffy that Finn is a good guy and wouldn’t want anyone else helping her raise Kelly. He might also tell Steffy to remind their daughter how much he loves their little girl.

Even though Steffy will agree to pass this along to Kelly once she is old enough to understand, Liam won’t be going to prison. The truth will be eventually exposed. If Liam isn’t really responsible for Vinny’s death, then who is? That is the million-dollar question and it will be answered during the week of June 21.