The Bold And The Beautiful (B&B) Spoilers: Steffy Under Stress, Baby In Trouble? 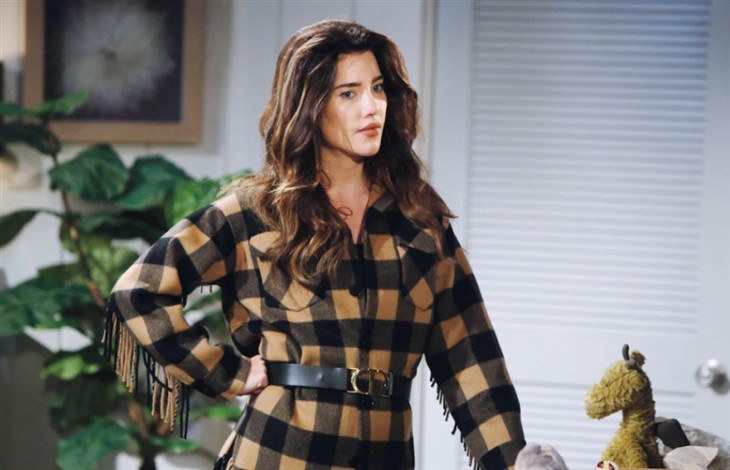 The Bold and the Beautiful spoilers document that Steffy Forrester (Jacqueline MacInnes Wood) can not afford to allow drama to impact her pregnancy. She and John Finnegan (Tanner Novlan) are likely less than a month away from welcoming their first child into the world. So, Liam Spencer’s (Scott Clifton) situation needs to be compartmentalized.

Meanwhile, Thomas Forrester (Matthew Atkinson) will find that he can’t control his emotions. Learning that his arch-nemesis confessed to hitting Vincent Walker (Joe LoCicero) will send Thomas into a fit of rage.

The Bold And The Beautiful Spoilers – Liam Spencer Did It

The butler didn’t do it, as was the case in various B movies in days gone by, Liam did. However, if B&B had a butler role it would like to be embodied by Dick Christie (Charlie Webber).

Liam has been guilty from the moment of impact. As Deputy Chief Bradley Baker (Dan Martin) said to Liam and his ringleader father, Bill Spencer (Don Diamont), 911 should have been immediately called. But Bill didn’t do so and Liam chose to remain silent after he regained consciousness in his father’s car.

Devoted The Bold and the Beautiful viewers know that Steffy was once carrying another baby boy. She and Liam were set to be first-time parents years before Kelly Spencer (Avalon and Colette Gray) was born.

Steffy’s original motorcycle accident caused Aspen Forrester Spencer (no actor was cast to play the role due to the circumstances) to be miscarried. Her second motorcycle accident took place last year. While she was seriously hurt, that incident was not tragic and also led to Novlan’s character being written into the cast.

Finn is very protective of Steffy, especially where Liam is concerned. He’s already told Clifton’s character that he no longer has free reign in Steffy’s life and those new rules have been enforced. So, viewers should expect Finn to be fully involved in helping Steffy to deal with the latest Liam-based news that impacts her life due to the permanent Kelly tie.

The Bold And The Beautiful Spoilers: Steffy Fights To Save Liam – Jealous Finn Dumps Herhttps://t.co/vcoaTORcve

Thomas has been insistent. He was going to realize justice for his childhood friend. But Liam being the hit-and-run coward was never in Thomas’ mind.

A soapy fork is now in the road. Those who care about Thomas will be watching to see how he handles this test of his aim to be a better person. A balanced mind won’t lobby for the key to Liam’s cell to be thrown away.

Allowances will be made for Thomas’s initial reaction. But then people will watch to see if the situation causes him to jump back overboard.