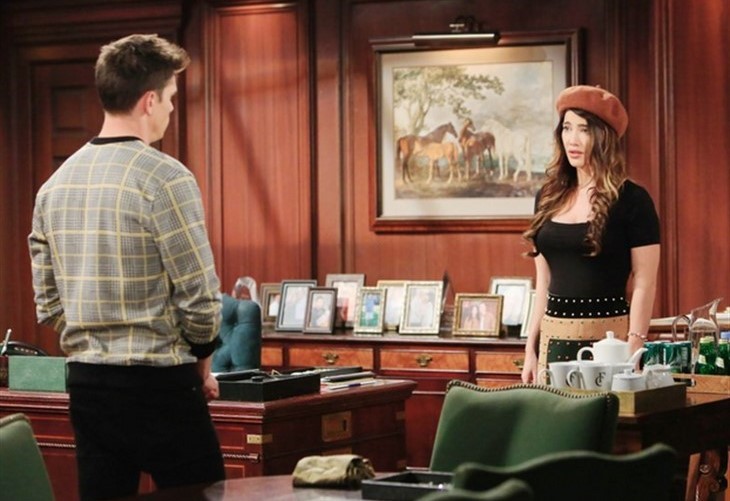 The Bold and the Beautiful spoilers document that Steffy Forrester’s (Jacqueline MacInnes Wood) slap across Sheila Carter’s (Kimberlin Brown) face hurt her just as much as it did John Finn Finnegan (Tanner Novlan). And just like that the Sinn wedding and family is in jeopardy.

What is a Forrester wedding without drama? Well, the audience didn’t get a chance to see boring. Instead, the mother of all villains, pun totally intended, appeared in the guest house and it was on.

The Bold And The Beautiful Spoilers – Drama Stops The Summer

Who’s thinking about what Zoe Buckingham (Kiara Barnes) is doing or how Vincent Walker’s (Joe LoCicero) never seen girlfriend or family are feeling right now? Probably no one until this sentence was read.

New storylines are always needed on the soaps, as past tales run their course and or run out of Steam. Yes, that was another jab at the past, as the Steffy, Liam Spencer (Scott Clifton), Hope Spencer (Annika Noelle) triangle is old news. Hey, Steffy even had Hope as her Matron of Honor, which brought extra joy to the ceremony before all Sheila broke lose.

B&B Spoilers – Retrospectives Refresh Memories And Made A Terrible Impression

The multiple reaction shots that Novlan offered, when horrid tales about Sheila’s past deeds were told, were joined with devoted audience members refreshing their memories. As for newer viewers, they got an eyeful of who Sheila used to be and that’s the point she wants to make.

Sheila has no defense regarding the volume and details of her criminal actions. Shooting people and committing other violent acts reflect a broken mind. But, as Finn said, his birth mother was in jail, and may have learned from her mistakes.

Steffy and the Forrester’s say no. Finn’s adoptive parents are equally appalled and worried about his judgment.

Processing the revelation of meeting the woman who gave birth to him would be enough for anyone to handle. Combining that with the incident happening after Finn was just married pushed his day over the top.

However, there never was going to be any way that Finn could prepare for Sheila. Steffy and her family believe that she is the most sinister person to ever darken their lives.

Yet, Finn is already bonding with Sheila. Will blood prove thicker than the Sinn nuptials? The fans will keep buzzing as they watch B&B this summer.