B&B Spoilers: Carter Has Big News For Quinn – Finn Has A Secret 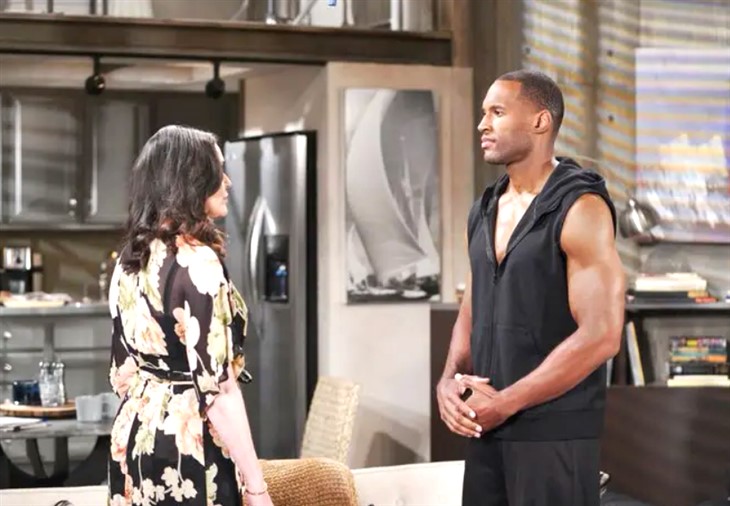 The Bold and the Beautiful (B&B) spoilers for Monday, August 15, 2021, reveal in Los Angeles Carter making a decision about his life.

The Bold And The Beautiful Spoilers – A Whole New Life For Quinn Forreter?

Carter (Lawrence Saint-Victor) wants Quinn (Rena Sofer) and he wants her badly. She is all he can think about and he loves that she is no longer attached to Eric (John McCook) and they can do what they want — to an extent. Carter is still uncomfortable about letting the Forrester’s know he is a big boy who can lead his own life. He also doesn’t want to lose his career and Quinn doesn’t want him to lose his career either, but when someone consumes your every thought, a career might be at risk.

It sounds like Carter is ready to throw that career away for Quinn on Monday and just wants to come clean although he wasn’t sure about it before. Now, it’s all he wants because if he can just be honest, he can actually leave his apartment with her. Then again, they have such a thing going in that apartment, why would they ever want to venture outside it?

Steffy (Jacqueline MacInnes Wood) laid down the law this past week and told Finn (Tanner Novlan) under no uncertain terms that he is not to see his birth mother. She is not going to have Sheila Carter (Kimberlin Brown) in their lives after this woman deprived her of her own mother, Taylor (Hunter Tylo) while growing up. And she is certainly not going to be a grandmother to her baby son. No way, no how. And she goes into marrying life thinking her new husband will love, honor, and obey.

Not so fast, Steffy. Finn just can’t break away from this fascinating and strange woman who said she gave birth to him. How could Steffy expect him to do that? He’s just going to have to sneak around behind her back and get to know Sheila Carter himself. He probably has a whole lot of questions that need to be answered, including who his real father actually is. The audience would love to hear that story, too. What would Sheila have to say? Stay tuned to The Bold and the Beautiful weekdays to find out.