The Bold And The Beautiful Spoilers: Eric Offers Sheila Another Chance? – Quinn Protective Of Ex-Husband 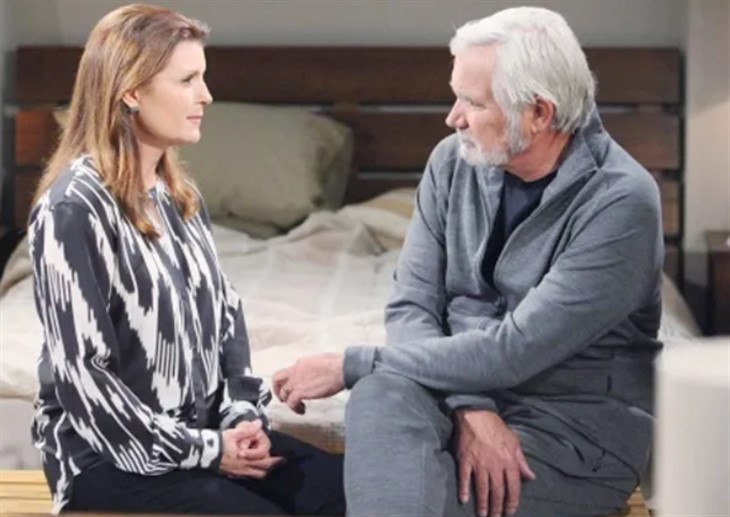 The Bold and the Beautiful spoilers document that Eric Forrester (John McCook) gave Sheila Carter (Kimberlin Brown) a second chance in the not too distant past. Might his legendary forgiveness gene influence his thoughts during this fallout period, where Quinn Fuller (Rena Sofer) has broken his trust and Queric is in the midst of divorce proceedings?

As devoted fans recall, Sheila was falsely accused of trying to kill Quinn (Rena Sofer) four years ago. Deacon Sharpe (Sean Kanan) was the revealed shooter, who was seeking revenge against Sofer’s character.

Sheila was not only cleared, but was also allowed by Eric to stay in the mansion while recovering from a fall. That coincided with Quinn’s short-lived infatuation with Ridge Forrester (Thorsten Kaye).

The Bold And The Beautiful Spoilers – More Than Three Decades Ago

Sheila famously or infamously, depending upon one’s opinion, crossed from The Young and the Restless to B&B in 1992. She noticed an advertisement in a newspaper while on Y&R, picked up the phone, and placed a call. Eric picked up.

Brown’s character was then seen in Los Angeles, California. She met with Eric, in his office at Forrester Creations. Brooke Logan Forrester (Katherine Kelly Lang) was married to Eric at the time. Within approximately a year, Beric was over and Sheric formed, as Sheila and Eric were married.

By 1995 that union ended. That has often been true of any Sheila related romances, as she becomes obsessed with the men she initially loves.

Fans would likely have bet on Sheila to beat Quinn in a cage fighter match. But, to the surprise of many, Brown’s last stint on B&B ended with Quinn defeating her. Despite the split between Quinn and Eric, Sofer’s alter ego is likely to be protective of her soon-to-be ex-husband due to the unique threat Sheila represents.

Queric wasn’t destroyed by Sheila. Eric was sympathetic to his former wife, but wasn’t fooled. Sheila didn’t depart in a hail of chaos, but simply faded away.

The above arc-ender was very unusual, considering Sheila’s backstory as one of daytime’s greatest villains. So, viewers kept her eventual comeback in the back of their minds, which TPTB has made good on now.

Eric is the beloved patriarch of the Forrester clan. On his word a number of family members might back off Sheila.

John Finn Finnegan (Tanner Novlan) holds the most sway in this situation. As Eric’s grandson-in-law, he’s a favored new family member as well. Like Eric, Finn possesses the kindness trait.

Sheila’s road is hard, no matter that she is Finn’s mother. But if her son and Eric become defenders, then it’s possible that Brown’s character can make incremental progress in daytime.