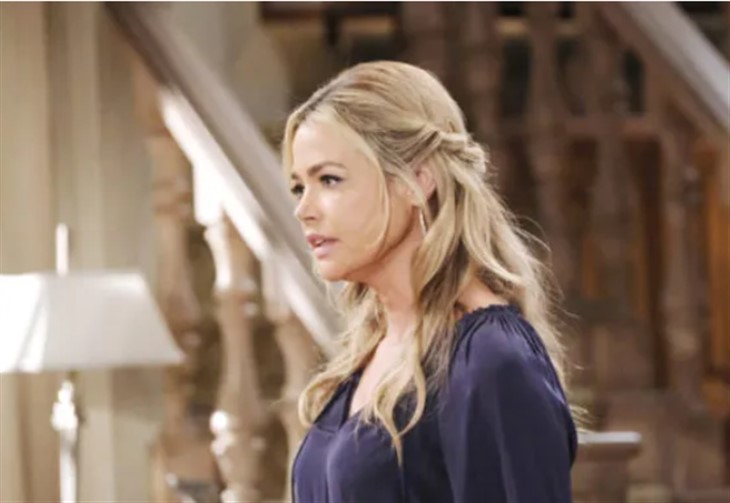 The Bold and the Beautiful spoilers reveal that Denise Richards stated Shauna Fulton pays the price for protecting her friend. At the time, we speculated that Shauna could lose everything, including her daughter. However, new information suggests the price could be much higher. Will Quinn Forrester’s (Rena Sofer) latest mess lead to a shocking and tragic death?

The Bold And The Beautiful Spoilers – Fixing Quinn Forrester’s Mess

B&B spoilers reveal that Quinn has found herself in a complicated mess. Feeling lonely and rejected by Eric Forrester (John McCook), Quinn gave in to temptation. As for Carter Walton (Lawrence Saint-Victor), he was heartbroken by Zoe Buckingham’s (Kiara Barnes) betrayal. He was also feeling lonely, which led to “Quarter” comforting each other.

Quinn is horrified that she betrayed her husband with the same man multiple times. When her secret was about to be exposed, Shauna took action to protect her BFF. Richards explained that’s the way the friendship has always been. Quinn’s scheming gets her into hot water and Shauna is always the one who takes the fall. The actress teased that this time, Shauna pays a very high price for Quinn’s sins.

While Quinn keeps insisting that the affair must end, she is also terrified that the truth will somehow get back to Eric. We have seen Carter be overwhelmed with guilt. Even though he was not with Zoe at the time, he felt horrible about hurting the model. But Zoe was not his only concern. Quinn’s husband is Carter’s boss at Forrester Creations. Plus, Carter and Ridge Forrester (Thorsten Kaye) are close friends.

Saint-Victor told SOD that there are two different sides to Carter. In upcoming episodes, viewers will see the hidden part of Carter. Based on the new promo for this week, Carter has a dark side.

The Bold And The Beautiful Spoilers – Denise Richards On ‘Quarter’ Consequences

The Bold and the Beautiful spoilers reveal that Richards spoke about the storyline. The actress indicated that the affair cover-up will continue to snowball and has unexpected twists. Richards started to Soap Opera Digest that Quinn is the one who cheated, but Shauna is the one that pays the price.

“It’s difficult because, in that impulse, I don’t think she anticipated it going further, and to see it spiral as it has really put Shauna in a vulnerable position.”

Since Shauna was introduced to the CBS soap, she has been given a few big storylines. There was her kissing Ridge when he was passed out drunk, which was beyond creepy. Then, she developed a friendship and romance with Ridge during one of his many separations from Brooke Logan Forrester (Katherine Kelly Lang). The wedding scheme was pretty huge and now she’s protecting Quinn.

Despite being thrown into some major storylines, she isn’t a fan favorite. The writers have tried to showcase Shauna’s positive qualities but fans can be brutal and unforgiving. With no real way to redeem Shauna in fans’ eyes and with no real direction to take the character, could Shauna get killed off? Could we be seeing “Quarter” cause not one exit, but two?