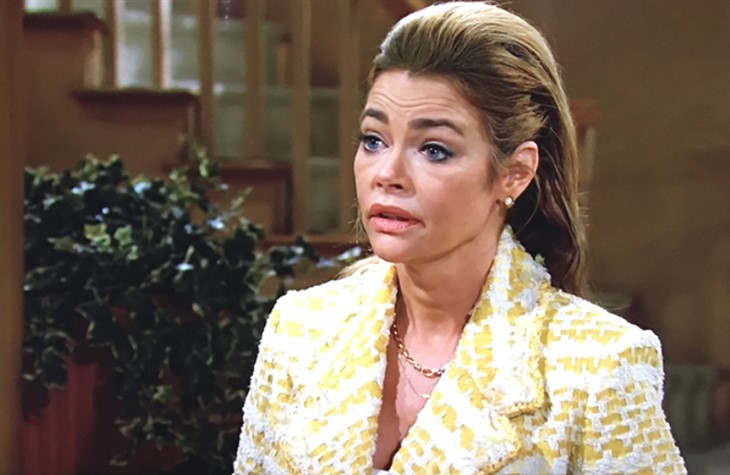 The Bold and the Beautiful (B&B) spoilers for the next two weeks, May 24 to June 4, will be full of excitement, intrigue and woe is me for Bill Spencer (Don Diamont), Ridge Forrester (Thorsten Kaye), Carter Walton (Lawrence Saint-Victor) and Shauna Fulton (Denise Richards).

First off, there is great news for fans of Steffy Forrester (Jacqueline MacInnes Wood): she is back! John “Finn” Finnegan (Tanner Novlan) is with her and soon after the gender reveal arrives.

Bill is anything but happy when he has a realization about Liam Spencer (Scott Clifton). Liam wants to turn himself in for the hit and run of Vinny Walker (Joe LoCicero). Ruh roh.

Explosive show spoilers reveal that someone is arrested, but who could it be? Will Bill take the fall for his emotionally neutered son?

There’s also the question as to whether or not Liam’s bad driving skills were responsible for Vinny’s death. Will the “real” killer come forward?

Elsewhere Carter and Quinn Forrester (Rena Sofer) don’t know whether to flirt, make out or ignore each other in the office.

Gold old Ridge, he can’t get why his buddy Carter has the hots for Shauna. Shauna took the blame for Quinn’s actions, and the word gets out leading to some heavily arched eyebrows.

Zoe Buckingham (Kiara Barnes) does more than raise her eyebrows. She keeps whining about Shauna even though Carter tries to make her nice. What doesn’t she get about he’s just not that into you and your fashion-forward dresses?

The Bold And The Beautiful (B&B) Spoilers: Wyatt’s Proposal To Flo Might Be His Best (And Awkward) One Yet
https://t.co/q5nU4s9VTV

Liam continues to tell Hope Spencer (Annika Noelle) he killed Vinny including how Bill covered everything up. Look for a holier than thou Hope to read Bill the riot act. Instead, Bill demands a dangerous ask from Lope—are they up to the challenge?

Hope and Liam are scared for the future and spend lots of time professing their undying love for each other. Will Hope become an accomplice so that Liam isn’t put in the slammer for the rest of his natural-born days?
At the same time, not completely dumb Wyatt Spencer (Darin Brooks) will begin to suspect Bill is hiding something about Vinny.

The Young And the Restless (Y&R) Spoilers: Sally Sticks Her Nose In Again – Makes More Trouble for Ashland & Kyle