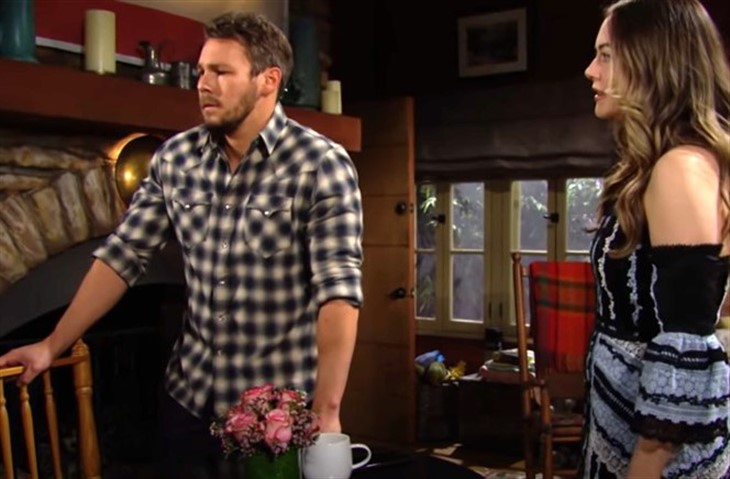 The Bold and the Beautiful spoilers document that Hope Spencer (Annika Noelle) will be stunned when Liam Spencer (Scott Clifton) tells her what he thinks he knows about Vincent Walker’s (Joe LoCicero) death. Viewers will see the next step in this cascading storyline in the coming days.

Hope’s choice won’t be whether to immediately end Lope or keep it going. Instead, she’ll need to determine how to handle what this latest admission means.

Liam believes that the authorities are bound to determine that he accidentally killed Vinny. Because he’s following Bill Spencer’s (Don Diamont) advice and is choosing not to report that event, an arrest is assumed as inevitable. That projected outcome clearly threatens Lope’s life.

The Bold And The Beautiful (B&B) Spoilers Wednesday, May 19: Hope Suspicious, The Beginning Of The End For Liam?

The Bold And The Beautiful Spoilers – Delayed Admission Provides Some Solace

Liam has been tortured since he saw a figure suddenly appear in front of him. That individual was LoCicero’s character, in what increasingly seems like a non-random event.

What are the odds, even in daytime, that of all the places in the world, Vinny would just so happen to be on that road at that time of night? A billion-to-one shot doesn’t even come close to accessing the probability.

Hope will realize that the man she loves has been burdened and wasn’t trying to do anything wrong by keeping this secret from her. Yes, she will be upset. But there is a path to forgiveness, depending upon other factors.

Thomas Forrester (Matthew Atkinson) feels guilty about how his last interaction with Vinny went. The lifelong friends appear to have parted at the hospital lab where Vinny was curiously working as a technician.

Vinny’s ability to be employed at the exact location where Steffy Forrester’s (Jacqueline MacInnes Wood) paternity test analysis happened was a lot for viewers to process. The fact that Vinny also had awareness of Steffy’s results, was working when they were available and knew how to adjust the outcome was cause for significant suspension of disbelief factors to come into play.

As a result of all of the above, Vinny bolted after being physically confronted by Thomas and John Finnegan (Tanner Novlan). He was later arrested, imprisoned, and then let out on bail.

Vinny’s subsequent accident in Bel Air, Los Angeles, California, is fueling Thomas’s desires. He wants to avenge his friend’s hit-and-run by finding the person who is responsible.

The Bold And The Beautiful Spoilers And Recap Wednesday, May 19: Thomas Makes A Vow – Hope Worried About Liam #BB #boldandbeautifulhttps://t.co/Ngm0HKKBN4

The Bold And The Beautiful Spoilers – Liam Spencer Preparing For Inevitable

If anything, Liam was bound and determined to tell Hope the truth. His delay in telling her about Vinny will be overshadowed by the unresolved situation that continues to unfold.

Hope is someone who Liam needed to confide in. Doing so should allow him to lean on her. But Thomas’s awareness of any part of this reveal or his own acquisition of previously unknown information stands to adjust the dynamic between Liam and Hope as well.

Soap Opera Spy is a leading source for everything linked to The Bold and the Beautiful. Check back regularly for B&B spoilers, rumors, and more soap opera news!