The Bold And The Beautiful (B&B) Spoilers: Zoe Confronts Shauna Over Her “Affair” With Carter 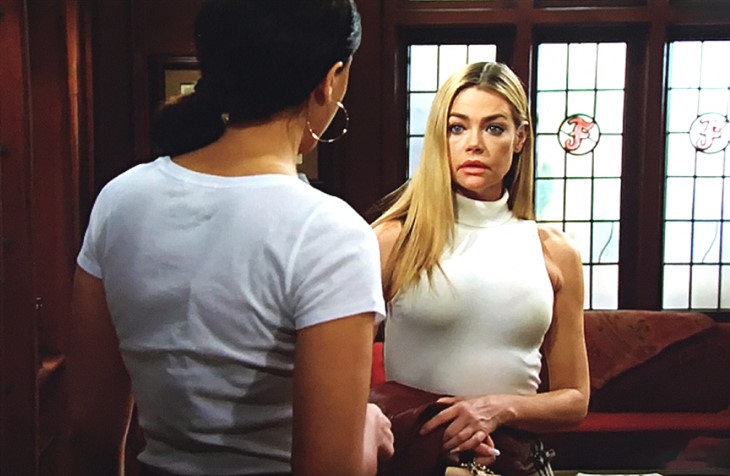 Viewers of The Bold and The Beautiful will remember that Shauna took the heat and said she was Carter’s lover after Zoe noticed Quinn Forrester’s (Rena Sofer) leather jacket over a couch in the Forrester Creations office. Zoe had gone to Carter’s place to try and win him back, and interrupted Carter in bed with Quinn!

Quinn quickly dove under the bed, but Zoe saw her bra and other items of clothing including the leather jacket at the foot of the bed, and both Carter and Quinn came into work late that morning! As Zoe started to accuse Quinn of having the affair with Carter, which could have gone really bad for both Carter and Quinn had Eric Forrester (John McCook) found out, Shauna took the heat, took the blame, and took the jacket!

Viewers of The Bold and The Beautiful will recall how Brooke, Quinn, and Shauna were all involved in a fight over Quinn trying to break up Ridge and Brooke, in order to matchmake Shauna and Ridge. Perhaps that should be keeping Ridge and Brooke broken up, as they were separated and having disagreements over Brooke’s accusations of Ridge’s son Thomas being obsessed with her daughter Hope. Quinn had brought her best friend for years, Shauna, up from Las Vegas where they used to live and raised their children together as single mothers. She wanted Shauna to marry a rich Forrester as she had and connived to get a drunken Ridge married to Shauna in a Las Vegas wedding.

But in the end, Shauna couldn’t live with her lie and admitted what she and Quinn had done to Eric. Eric commended her for her honesty and the “divorce” which also had been fake was dissolved. Now Shauna again lied for her friend, but it was to help Quinn win Eric back, not to break them up – although Shauna preached quite the sermon to the errant Quinn when she confessed to her!

Now, Zoe, remembering what happened with the fake wedding and Brooke blaming Shauna for going after Ridge, accuses her of the same thing concerning Carter! She takes a page from Brooke’s playbook as she accuses Shauna of trying to seduce Carter, perhaps with the end game of marriage for his money! Will Shauna keep Quinn’s secret? She may wonder if it’s worth selling her own soul over a devil named Quinn!

Days Of Our Lives Spoilers: Jan Saves Chloe, But Only If She Kills Claire