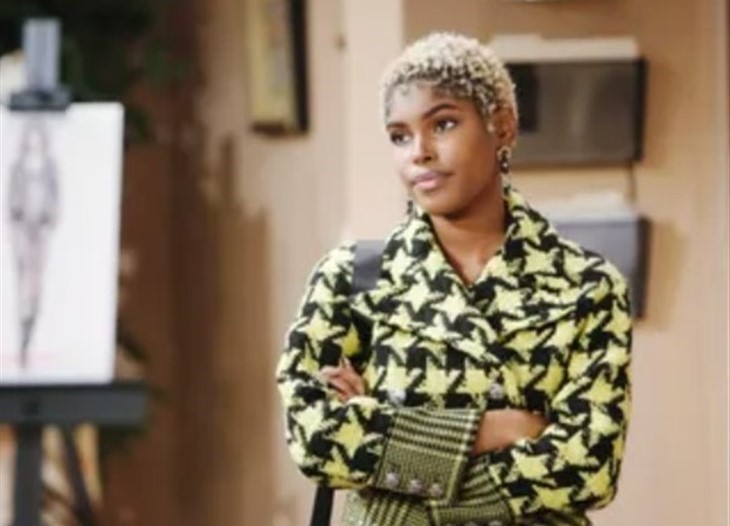 The Bold and the Beautiful spoilers tease that Paris Buckingham (Diamond White) will soon confirm the truth. Zoe Buckingham (Kiara Barnes) has deeper feelings for Zende Forrester Dominguez (Delon de Metz) than she does for the man she’s engaged to.

To-date, Paris has been confused by her older sister’s very strange reaction to a simple job offer at Forrester Creations. But Paris will see the picture clearly as soon as Zoe’s true feelings are revealed.

Zende was interested in Zoe before Paris came to Los Angeles, California. But he chose not to pursue where his heart was leading him.

The respect that Zende has for his friend, Carter Walton (Lawrence Saint-Victor), is admirable. There are a number of characters on B&B who would have pursued someone they were interested in, regardless of any engagement ring.

Zende is proving to not be one of those people. He’s also directing healthy interest toward Paris, who is single.

Paris arrived with a bright smile and a totally pleasant attitude. At first it seemed that she and Zoe had a solid family relationship.

But, as is often the case in life with any rivals, sisters or not, romantic hopes and expectations got in the way. Zoe is not truly in love with Carter, though he doesn’t realize that yet.

Zende’s allure has captured Zoe’s interest, as it has her sister’s. But Paris hasn’t fully determined, or hasn’t been willing to openly speculate about, what’s in Zoe’s mind.

Paris has graduated from college and simply wants to establish herself in the world. Moving to be with her older sister was a natural thought in furthering that goal, but she’s unexpectedly sparked sibling drama.

Carter just told Zoe that he wants to set a wedding date. He wanted to marry her in the recent past, after what seemed like only days of engagement. She pushed that decision off, as Zoe was and is trying to determine what decision is best for her life.

If Zoe and Carter marry their union would seemed destined to have eventual trouble and be prone to failure. But telling him the truth will also break his heart, with no guarantee that Zende will suddenly shift his feelings from Paris back to Zoe. So, this is a compelling set of conflicts that are playing out on B&B.