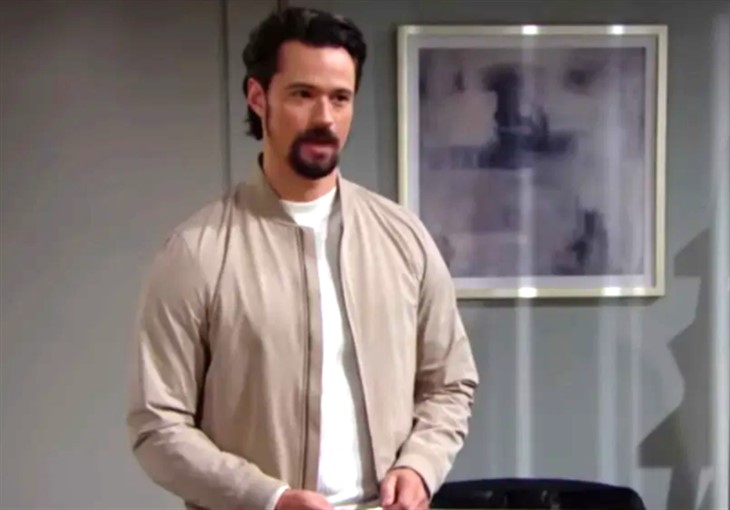 The Bold and the Beautiful (B&B) spoilers and updates tease that Thomas Forrester (Matthew Atkinson) is about to move into prime position. Ironically, he hasn’t been trying to present himself as an alternative to Liam Spencer (Scott Clifton). But Hope Spencer’s (Annika Noelle) realization of her husband’s recent betrayal dramatically changes the dynamic on B&B.

Liam’s admission on The Bold and the Beautiful about the time he spent with Steffy Forrester (Jacqueline MacInnes Wood) is more than shocking. His compulsion to volunteer a full admission of what happened after the infamous and many times replayed mannequin kiss incident leads to a major Lope fallout.

Steffy has been pleading with the man who could be the father of the child she’s expecting next summer. She felt that Liam should give her time to have a paternity test conducted.

If Liam proved to be the father then, yes, Hope would need to be told the truth. But if John Finnegan (Tanner Novlan) was scientifically tagged as the dad, then Steffy believed that she and Liam should keep what happened between them forever.

Liam was literally heartsick with guilt and refused to go along with Steffy’s plan, believing that Hope would accept what happened and forgive him in time.

Hope has been supremely loyal to Liam. She’s waited for him, even during periods in the past when he returned to Steffy and had a child with her.

But this admission is just too much. After the year-plus push, where Hope actually became Thomas’ wife in name only, through the renewed effort to remarry her last year, she remained fully committed to Liam. Hope never crossed any romantic line with Thomas, when she could have. That was due to the depth of her love for Liam.

So, to learn that Liam reacted to what he thought was a Thomas-Hope kiss, by running to the cliff house on that night and reigniting the Steam relationship, would have been a lot to digest. But to also hear that Steffy is pregnant is a double moral outrage on The Bold and the Beautiful.

While the stunning reveal is playing out, Thomas is on the mend in Brooke Logan Forrester’s (Katherine Kelly Lang) house. His spot on the couch and accompanying relaxed attitude is real.

No games, or manipulative intentions. Incredibly, Thomas sincerely wants to recover and is truly grateful to everyone who is offering compassion. That pitch perfect effort has already made a good impression on Hope.

Next, as her marriage to Liam is either severely strained, or ends, Thomas’ stock will rise in Hope’s mind and potentially, her heart.

SOS is a leading source for everything linked to The Bold and the Beautiful. Check back regularly for B&B spoilers, comings and goings, and soap opera news!