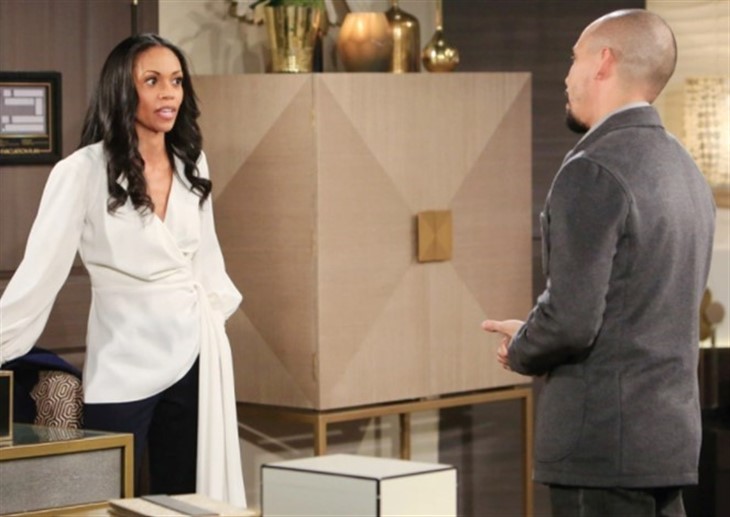 The Young and the Restless spoilers document that Amanda Sinclair (Mishael Morgan) is wrecked by the encounter with her mother, Naya Benedict (Ptosha Storey). The information she’s told about the circumstances of her birth and foster care decision prove to be overwhelming.

As viewers see, Amanda seeks out Devon Hamilton (Bryton James). He’s quickly become a true confidant, with his brother-in-law role expanding into what feels like a romantic pairing because it is.

Fans were aware that Amanda’s complete lack of interest in her past, or the obvious, implied link to Hilary Hamilton (Morgan), wasn’t normal. Viewers, along with Amanda herself, suspended disbelief in order to allow this new character’s backstory to develop at a different pace.

Any woman who arrived in Genoa City, Wisconsin, in 2019, and learned that there was a deceased lady who looked exactly like her, would have likely began pursuing that highly unusual issue immediately. The availability of internet resources alone would have made such an effort simple. But Amanda rarely spoke about the matter, which viewers recognized as the writing staff shelving the topic for future focus (that has arrived).

Y&R Spoilers – Pushing The Plot And Creating A New Pairing

The purposeful splitting of Devon and Elena Dawson (Brytni Sarpy) was matched by Amanda’s decision to pursue the facts about her personal history. Viewers are able to digest this effort if they choose to believe that the friendship Amanda and Devon have developed allows a joint venture to take place.

It does make sense that Devon would be interested in the identical twin sister of the love of his life. He’d naturally have familial feelings for Amanda, as they are connected by legal matrimony.

Another issue that’s undeniable is the fan’s response to Hevon. That couple was embraced and provided plenty of entertaining drama during the years that James and Morgan worked together, which came during her first stint on the show. So, it’s natural that viewers would be open to seeing if an alternate version of Hevon can work.

Devon shifts his focus to Amanda’s concerns whenever she asks him to. That’s one of the ways that Y&R fans know that he is in the process of falling in love with Morgan’s second character.

The fact that Amanda moved away from a romantic interest in Nate Hastings (Sean Dominic) and more significantly, Billy Abbott (Jason Thompson), signaled that she was going to become involved with Devon. Demanda is already forming, even though Devon and Amanda aren’t calling themselves a couple. But they soon will, if the current storyline continues to unfold as it has.