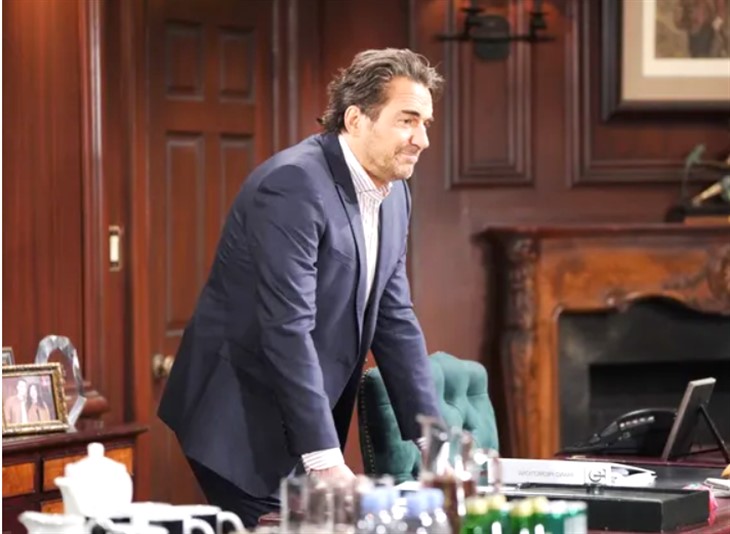 The Bold and the Beautiful spoilers reveal that Ridge Forrester (Thorsten Kaye) will have an undercover assignment for Justin Barber (Aaron D. Spears). As we previously reported, Justin is told to secretly investigate Quinn Forrester (Rena Sofer) and find out what she’s really up to. The actor explained that Ridge has been in the “Quinn club” and knows what she’s capable of.

The Bold And The Beautiful Spoilers – Ridge Forrester’s Suspicion

B&B spoilers reveal that nearly everyone is suspicious of Quinn and Eric Forrester’s (John McCook) reconciliation. The couple has reconciled before but this time, things are different and others are noticing. For the most part, Ridge has tried to stay out of Eric’s personal life. This time is an exception as he is convinced that Quinn is making a fool of Eric.

Ridge and Brooke Logan Forrester (Katherine Kelly Lang) can’t squeeze the truth out of Eric. Despite multiple attempts, Eric refuses to tell them the truth about what’s going on. “Bridge” knows that they will never get answers from Quinn, either. So, Ridge decides to take Justin up on his offer. Even though playing dirty isn’t exactly Ridge’s style, he will do anything to protect Eric.

The Bold And The Beautiful Spoilers – History With The ‘Quinn Club’

The Bold and the Beautiful spoilers reveal that actor Thorsten Kaye spoke to Soap Opera Digest about the storyline. Why does Ridge tell Justin to investigate Quinn instead of staying out of Eric’s marriage? Kaye explained,

“People will say, ‘Why don’t you trust Quinn?’ and as Ridge, I would say, ‘Any club that has you as a member, there’s got to be something wrong with them, right?’ Ridge has been in the Quinn club. She invited him in and so, yeah, he doesn’t trust her because of that. He doesn’t trust her since they’ve made out before. In his mind, there’s no stopping that woman. Ridge really just wants what’s best for his dad.”

Quinn and Carter Walton (Lawrence Saint-Victor) give into temptation during the week of September 20. Instead of telling Eric the truth, since he gave “permission,” the promo suggests “Quarter” keep it a secret.

When Justin is told to investigate every single corner of Quinn’s life, that secret will be exposed. It might not be too much of a shock to Eric, but will be an explosive revelation for everyone else. How will Ridge, Brooke and everyone else handle Eric’s desperate compromise just so he doesn’t have to be alone? We will have to keep watching the CBS soap to find out what happens next with this storyline.