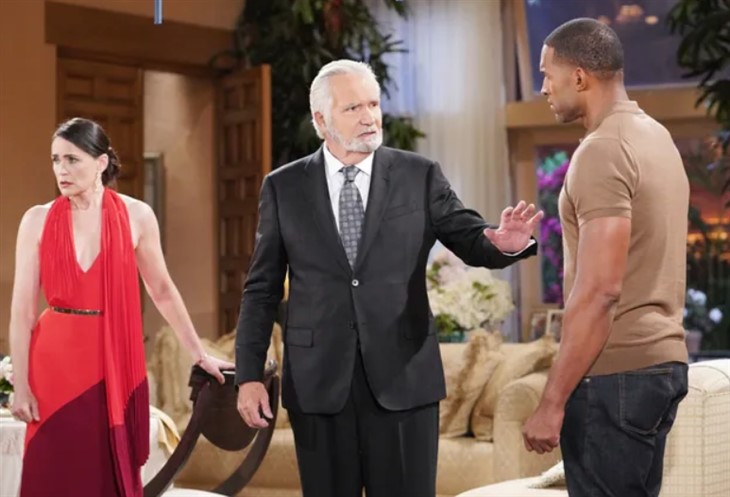 The Bold and the Beautiful (B&B) spoilers for Monday, September 20, 2021, reveal in Los Angeles Quinn Forrester and Carter Walton finally giving into their passions and wants. Isn’t this what Quinn’s husband requested of them?

Eric Forrester (John McCook) knew what he was doing when he gave Quinn (Rena Sofer) papers that he needed someone to deliver to Carter Walton (Lawrence Saint-Victor). Quinn did as requested and showed up at Carter’s apartment looking like the cat who ate the canary. As she held the papers up, Carter knew what was going on, but could they really do that to Eric even though he asked them to?

They spent Friday discussing that once again, as well as discussing how much they miss and want one another, something they already did twice in the last week. So, on Monday, one thing leads to another and Eric gets his wish. Quinn and Carter sleep together Quinn has her needs met — again, exactly as Eric wanted. Or at least this is what Eric said he wanted. Did he really mean it or was this just a test? Are Quinn and Carter about to fail Eric’s test? That would make the story much more interesting…

B&B Spoilers – A Day Without Paris Buckingham Around?

Paris Buckingham (Diamond White) has made herself a little too comfortable in Steffy’s (Jacqueline MacInnes Wood) house and enjoys being there as a friend to Finn (Tanner Novlan), especially when he’s not wearing a shirt. Even when she walked in on Steffy and Finn in a compromising position in the living room the other day, she didn’t run away quickly at all. Instead, she lingered for a few minutes.

Apparently, she will make herself scarce on Monday, as Finn and Steffy reconnect. They haven’t had much of a honeymoon period so maybe this is a good thing to get out of the way now before Sheila Carter (Kimberlin Brown) returns. We all know she will because Sheila never gives up and is not about to let Steffy off the hook so easily. Finn and Steffy think they are finally out of the woods, so they really need to think again. Stay tuned to The Bold and the Beautiful weekdays to see how these stories play out.

90 Day Fiance: Sumit And Jenny Pose Like They’re In A Wedding – But Will It Ever Happen?