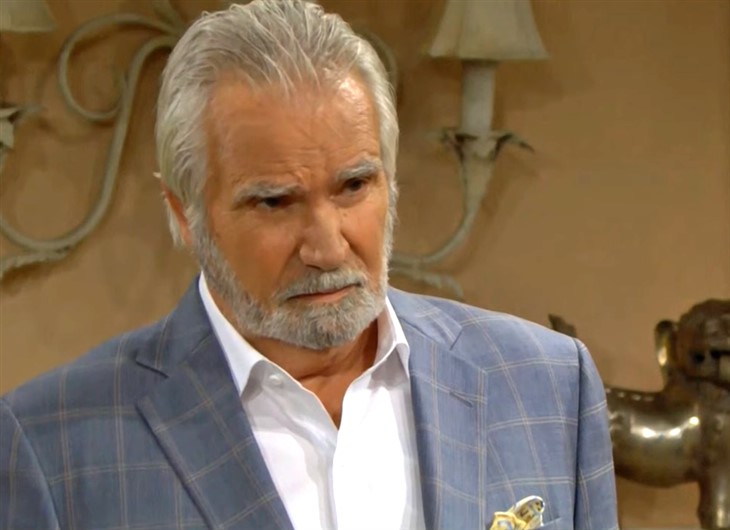 The Bold and the Beautiful spoilers document that Eric Forrester’s (John McCook) reconciliation was humbling and heartfelt. Quinn Fuller Forrester (Rena Sofer) is offering genuine compassion to her husband as well.

However, B&B fans know that Quinn hasn’t shared the full truth of what happened with Carter Walton (Lawrence Saint-Victor) in recent weeks. The Queric bounce back would likely end if she did.

Bridge is pleading with Eric as the above is playing out. But Ridge Forrester (Thorsten Kaye) and Brooke Logan Forrester’s (Katherine Kelly Lang) full-throated attack against Quinn hasn’t gotten through to the patriarch of the family.

The Bold And The Beautiful Spoilers – Private Matter Not Revealed

Eric had a serious heart-to-heart with Quinn shortly after she moved back to the mansion. She didn’t want to revisit what’s happened in recent months.

But Eric wasn’t rehashing yesterday. Instead, an unknown piece of information was provided that completely shifted Quinn’s perception of reality. As Eric told her, he never stopped being attracted to her. But the diagnosis he recently received caused him to be ashamed and then behave in a manner that he realized was unfair.

Quinn is now forced to reconsider the connection that she created with Carter. Quarter isn’t as destined as it appeared to be as a result.

Eric will yell and carry on with Brooke and Ridge, as they try to press their accurate point. Bridge’s point is what it’s long been, Quinn isn’t the right woman for him.

It’s natural for Eric to take offense to Bridge’s approach, considering current developments. They are practicing tough love. But he sees their words as biased against Quinn.

Brooke and Ridge believe that Quinn has gotten her hooks back into Eric. That’s not exactly true, as Eric’s humbling admission actually sparked Quinn’s sincere desire to be a fully supportive wife once again.

The Bold And The Beautiful Spoilers – Next Reveal Produces Unexpected Results?

Since this is daytime and the Forrester family is being referenced, it seems destined that the extent of Quarter’s connection will be exposed. The timing of that may influence how Eric and the other parties react.

However, Eric’s confidence is shattered. He’s vulnerable and in time could decide that Quinn deserves more.

Eric is such a selfless human being that he might decide to let Quinn go if his physical problem isn’t solved. That would be quite the turnabout on B&B, but Bridge likely wouldn’t see it that way.

90 Day Fiancé The Other Way: Ellie Concerned Over Victor’s Safety