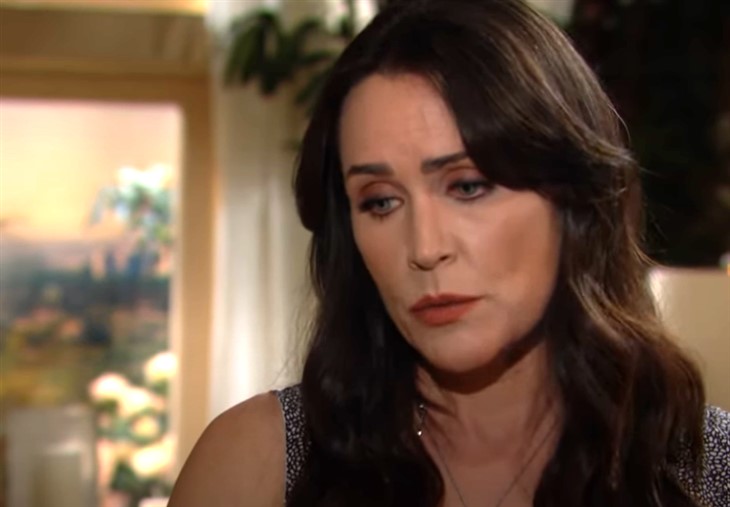 The Bold and the Beautiful spoilers reveal that Quinn Forrester (Rena Sofer) is one desperate woman. When Shauna Fulton (Denise Richards) told her Paris Buckingham (Diamond White) confronted her, Quinn kept making fun of the young woman. As soon as Shauna said Paris knows the truth, it wiped Quinn’s smile off her face. She takes drastic action to keep Paris quiet.

The Bold And The Beautiful Spoilers – Shauna Fulton’s Bombshell

B&B spoilers reveal that Paris was the one to confront Shauna after overhearing the truth. She didn’t bust in the door and announce her presence. Instead, she slithered off and secretly confronted Shauna later. Even though she plans on confronting Quinn, too, Shauna beats her to it. Shauna texted Quinn with a 911 message and then stopped by Eric Forrester’s (John McCook) house. She certainly dropped a bomb on Quinn’s blissful morning.

Quinn is a desperate woman and won’t allow anything or anyone to ruin her marriage. As she told Carter Walton (Lawrence Saint-Victor), things aren’t just back to normal. Quinn said that things are even better than they were before. So, when she learns that Paris knows the truth, she sets out to do damage control.

The Bold And The Beautiful Spoilers – Confronting Paris Buckingham

The Bold and the Beautiful spoilers reveal that Quinn confronts Paris. She tries to convince Paris to keep the “Quarter” tryst a secret. Sofer explained to Soap Opera Digest,

“Quinn absolutely loves her husband. He is the most important thing in the world to her. The whole reason that Quinn and Carter got together in the first place was that she so desperately wanted to be with her husband. She wasn’t cheating on Eric because she wanted something different… she kind of pleads her case about the fact that she was lonely.”

The Bold and the Beautiful spoilers reveal that Paris must not be convinced by Quinn’s plea. So, she uses another angle. Quinn explains to Paris that if she exposed the truth, she will destroy Zoe Buckingham’s (Kiara Barnes) happiness. She insists that she is no threat to Zoe’s relationship, but if Paris opens her mouth, many lives will be ruined.

“Quinn is desperate. It’s not as if they want to be together. Carter and Quinn don’t see a future with each other. No matter what they may feel for each other, she is not sitting there thinking, ‘I’m going to become Mrs. Carter Walton.’ That’s what Zoe wants. She knows Carter should be with this young woman who he can have a family — that’s not Quinn.”

The only person standing in the way of that happiness and future in Paris. What will she decide to do?