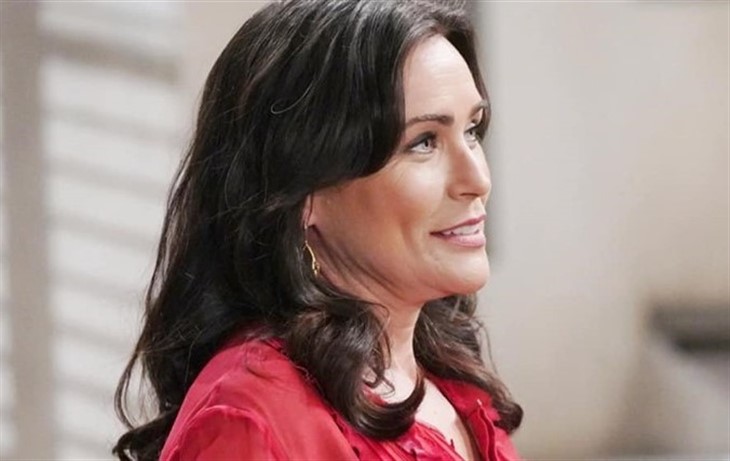 The Bold and the Beautiful spoilers reveal that Quinn Forrester (Rena Sofer) befriended Zoe Buckingham (Kiara Barnes). She claimed to want to help the model get back her relationship. Zoe keeps talking about what a great friend Quinn has been. However, Quinn will admit that she doesn’t consider Zoe to be a friend at all. Sofer explains what’s going through Quinn’s mind.

The Bold And The Beautiful Spoilers – Paris Buckingham’s Accusation

B&B spoilers reveal that Quinn finds out that Paris knows the truth about Carter Walton’s (Lawrence Saint-Victor) fling. Quinn confronts her and tries to convince her to be quiet. She explains what led to her sleeping with Carter in the first place and that it had nothing to do with her wanting the COO. She talks about her marriage with Eric Forrester (John McCook) and that she was just lonely. Paris makes a lot of accusations, including that Quinn isn’t really Zoe’s friend.

Surprisingly, Quinn completely agrees with Paris that she isn’t and never was Zoe’s friend. When she approached Zoe, she was never interested in becoming friends with the model. The only reason she befriended her was that they both seemed to be going through the same thing.

The Bold And The Beautiful Spoilers – Kim Mutual Connection, Not Friendship

“No, they’re not friends, but Quinn really was trying to help her. Zoe, too, was lonely and she just wanted forgiveness, and Quinn felt a connection to that. She could relate to somebody who just wanted to get her relationship back on track after making a mistake, so they connected.”

As fans have seen, Zoe seems to think that she and Quinn are great friends. So, this explanation won’t sit well with Paris, who wants to protect her sister.

As for Quinn trying to convince Paris to keep quiet, she explains why she can be so sure that she’ll never sleep with Carter again. She wants to make it clear that this isn’t a love triangle, it was just a fling until she got Eric back. Quinn says that she has no interest in a relationship with Carter and is madly in love with Eric.

Plus, she brings up that if Paris tells the truth, then Zoe will be the one who will be hurt the most. This gives Paris food for thought and she will take some time to really think about what the right thing to do is. Even if Paris agrees to keep this secret, will she really keep it from Zoe forever? We will have to keep watching the CBS soap to find out.