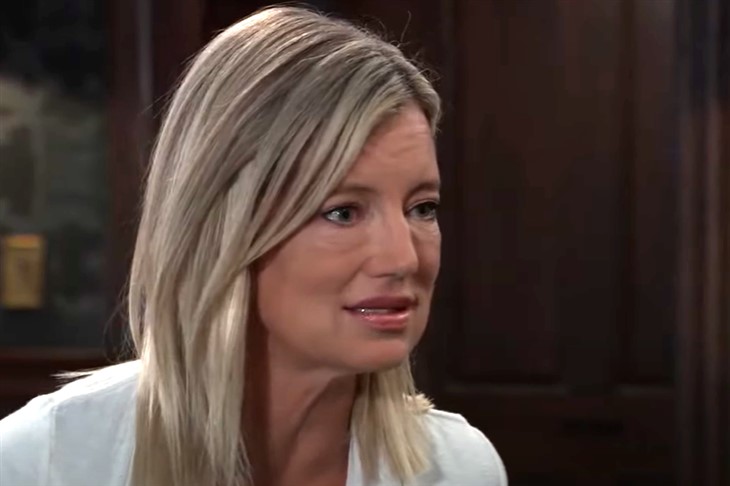 General Hospital (GH) spoilers for Tuesday, June 15, 2021, reveal that in Port Charles, NY Nina not knowing how to make her Port Charles escape without giving away her Big Lie.

General Hospital Spoilers – Will Sonny Corinthos Ever End Up Home?

Nina (Cynthia Watros) is making the rounds in Port Charles and seeing the people she’s been close to in the past may make her want to stay. But Sonny, aka Mike, is over in Nixon Falls and she misses him. And he also misses her.

During her rounds, she visits Maxie (Kirsten Storms) to offer her comfort about what she thinks happened to her baby. That’s when her phone rings and “Mike” (Maurice Benard) comes up on the caller ID. Maxie sees the name and Maxie being Maxie, she has to know. Who is Mike and why is he calling Nina? Is it really any of Maxie’s business? Perhaps, considering that Mike is Sonny and after about six months, this story needs to end, it should be everyone’s business.

Meanwhile, over in Nixon Falls, Phyllis wonders if “Mike” wants to finally leave and move on. Nope, not Mike. He’s staying put because why bother finding out who he really is?

General Hospital spoilers tease Ava (Maura West) and Carly (Laura Wright) sharing some words and observations, but it looks like Carly needs to tell her something is none of her business.

Ava also has dinner with Nikolas (Marcus Coloma) at the Metro Court, where Jason (Steve Burton) confronts them. Jason takes it upon himself to tell Nikolas off and whatever he says makes Nikolas tell Ava that he never wants to be with anyone but her.

Jason also reunites with Britt (Kelly Thiebaud) at the Metro Court and it seems a bit awkward as Britt says what happened in Canada may need to stay in Canada. Is that what Jason wants?

Nina may have been there to lend support to Maxie, but Sam (Kelly Monaco) and Dante (Dominic Zamprogna) really want to find that baby. To that end, they decide to work together and question Austin (Roger Howarth). He tells them everything that happened when he delivered Louise as he knows it and paints himself as the hero, which he kinda was. But he doesn’t have the answer Sam and Dante are looking for. What on Earth happened to Crazy Nurse Chloe (Kimberly J. Brown)? Stay tuned to General Hospital weekdays to see how these stories play out.