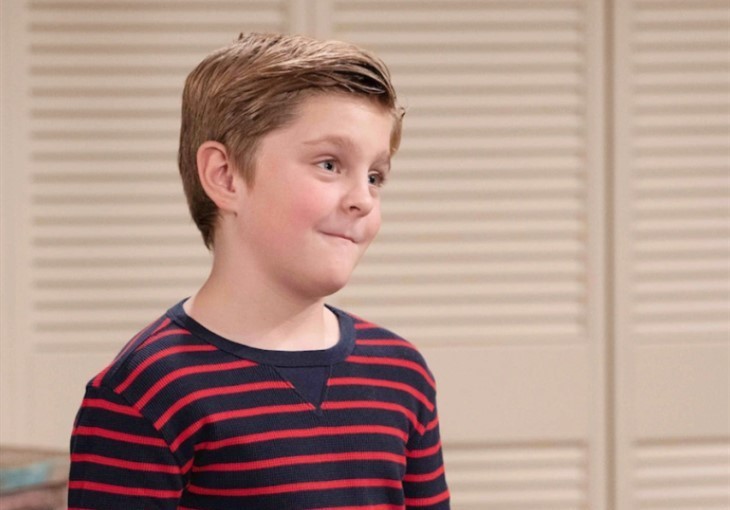 The Young and The Restless (Y&R) spoilers tease that Johnny Abbott (Holden and Ryan Hare) will blindside Lily Winters (Christel Khalil) and his father Billy Abbott (Jason Thompson) when he has a grownup question for them on an upcoming episode of The Young and The Restless. He wants to know from Lily if she and his dads moving in together means that Lily is Dad’s new wife!

Viewers of The Young and The Restless will recall that Johnny and his sister Katie Abbott (Sienna Mercuri) were set for their first overnight with Lily and Billy in their new home. Johnny is growing up quickly, in size like a weed as boys his age tend to do, but Lily and Billy discover that he is asking some pretty grown-up questions now

On the latest weekly preview of The Young and The Restless, Johnny, Lily, and Billy are in the kitchen when all of a sudden Johnny blindsides them when he wants to know if their moving in together means that Lilly is Billy’s new wife!

It’s not like Johnny doesn’t realize that his parents are divorced and have been for a while, and Johnny’s smart enough to know that Lily has been his dad’s girlfriend for a while, so with them moving in together that does seem like the next logical step! Lily’s big smile gets a little smaller at the question, and Billy looks like he’s thinking he’s being put on the spot by his son’s assumption!

But then, Y&R recaps and spoilers show Johnny has never lived with a couple who weren’t married. He knows his maternal grandparents Victor and Nikki Newman (Eric Braeden, Melody Thomas Scott) live together and they are married. Johnny knows that when his dad and his adoptive mother, Victoria Newman (Amelia Heinle) were together and he and Katie lived with them that they were married. It’s not such a surprising question when you think about it that way!

Granted, Lily may be the one better equipped to explain her and Billy’s living situation to Johnny. Longtime viewers of The Young and The Restless know that her twins with her ex-husband Cane Ashby (Daniel Goddard) are now grown and on their own, and she is more experienced with parenting than maybe Billy is, but then she didn’t move in with another man and have to explain it to her kids. Billy and Lily don’t want to rush into things, and maybe they just tell Johnny the truth.

Yes, they are dating but they don’t want to rush into marriage until they really, really know that it will work. They both know that Johnny probably won’t buy it if they try to say they are roommates! Johnny isn’t quite a teenager but he’s heading there by leaps and bounds! He’s quite big and quite advanced in his thinking for only being nine, and he seems closer to being nine going on twenty-five with some of the questions he is asking! Lily, however, is the one that Johnny posed his unexpected question to.

She and Billy both know there is a potential marriage ahead, but exactly how much do you tell a nine-year-old? Of course, there are the unvoiced questions that Billy and Lily both have as to if Victoria put Johnny up to asking for information like this, although Billy currently has concerns that his ex-wife is getting into something dangerous with Ashland Locke (Richard Burgi). Billy and Lily will figure out an answer for the precocious Johnny on The Young and the Restless!