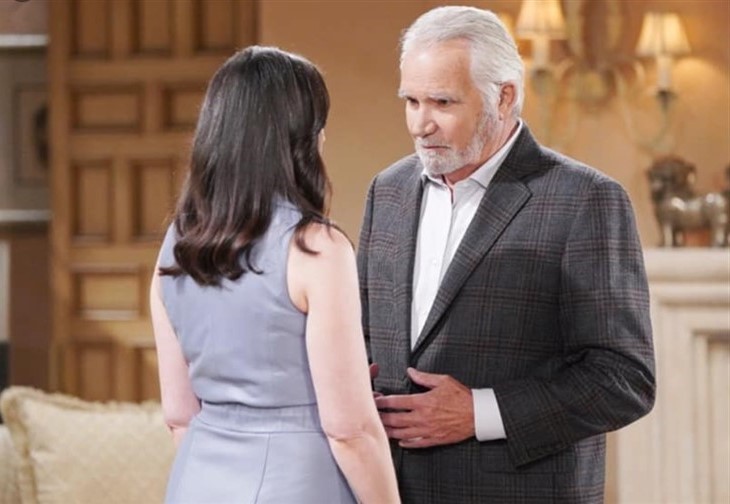 The Bold and the Beautiful spoilers for the week of September 20 reveal that Quinn Forrester (Rena Sofer) cheats on Eric Forrester (John McCook) once again. Brooke Logan Forrester (Katherine Kelly Lang) and Katie Logan (Heather Tom) are suspicious of Quinn’s intentions. Will they get Quinn to confess or do they already know about her most recent betrayal?

The Bold And The Beautiful Spoilers – Protecting Eric Forrester

B&B spoilers reveal that Brooke and Ridge Forrester (Thorsten Kaye) were dismayed to discover Eric and Quinn reconciled. When the couple tried to discuss it, Eric told them to stay out of his personal life. However, Ridge and Brooke are determined to protect Eric and they are convinced that Quinn will only hurt him again. Ridge tries to get Eric to open up about the couple’s issues. Meanwhile, Brooke will do her own sleuthing to prove Quinn will never change.

During the week of September 20, Quinn and Carter will try to fight temptation. However, they will be unable to continue resisting each other. Giving into passion once again, this can’t be good for Eric and Quinn’s marriage. While it’s true that Eric has a medical problem, Quinn promised it wasn’t an issue and she would stay loyal to him.

The Bold And The Beautiful Spoilers – Intentions Questioned by Logan Sisters

The Bold and the Beautiful spoilers reveal that Brooke and Katie will question Quinn’s intentions. The Logan sisters will also band together to support Eric. Keep in mind that “support” might mean one thing to Eric, but another to Brooke and Katie. They certainly are not on the same page when it comes to Quinn, that’s for sure.

If Brooke and Katie are already suspicious of Quinn, they could be watching her. It’s very possible that the Logan sisters will learn about Quinn and Carter’s latest tryst. If they confront Quinn, will she confess or try to deny anything happened?

Meanwhile, Eric is already dealing with conflicting emotions regarding his marriage. So, when he learns that Quinn has betrayed him yet again, the relationship might not survive. Despite how much “Queric” loves each other, there are only so many betrayals that one marriage can take before it crumbles.

Is this the end of “Queric” and if so, will Quinn and Carter become an official couple? Will Eric move on to Donna Logan (Jennifer Gareis)? It’s looking that way as she has now confessed to Brooke and Katie on three separate occasions that she’s still in love with Eric. What do you think is going to happen with this storyline?